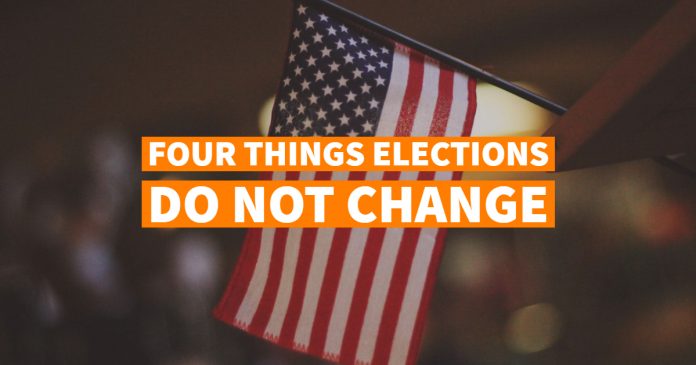 Written in 2012, the principles still apply to today!

1. The Omnipotence of God

The election did not dismiss the sovereignty of God, it displayed it.  It was no surprise to God that Barack Obama won the election.  Scripture reminds us that God is in control of government, elections, and kings.  Consider the following verses:

Daniel 2:21- “And he changeth the times and the seasons: he removed kings and setteth up kings: he giveth wisdom unto the wise, and knowledge to them that know understanding”
Psalms 75:7- “He putteth down one and setteth up another”
Romans 13:1- “Let every soul be subject unto the higher powers.  For there is no power but of God: the powers that be are ordained of God.”

The election in no way changed the nature, attributes or providence of God- He is still in control!

2. The Outcome of History

God created the world and set time into motion.  In real time God established kingdoms, covenants, and empires.  One day the Lord Jesus Christ will return to resurrect the dead and rapture the saints of God.  We are still on course, and the outcome of history has not changed.  Conservatives may not have won the election, but Christians will win at the end.  John the Beloved has already seen us gathered around the throne of God, and we are exactly where we need to be in history.  The election in no way changed the victory that is ours in Christ Jesus.

3. The Outlook of Scripture

Heaven and earth may pass away but not one jot or tittle from God’s Word will fade.  The eternal promises of God’s Word are just as real, just as relevant, and just as reliable as they were before the election.  Open the Word of God, draw strength from its promises, cling to the God-breathed declarations and realize you can place your confidence and trust in what it says.  Throughout this political season both candidates offered promises and made statements they will never be able to keep, but I am glad my King is not slack according to His promises.  His Word is still true!

4. The Obligation of the Believer

Now is not the time to give up or give in.  Now is the time to fight harder, stand longer, and work stronger than ever before.  The election did not change the fact that we are still responsible to preach the Word, worship the Lord, witness to the lost, pray without ceasing, and give unto the Lord.  It is our obligation to pray for the President and hope that God will use Him to bring the right kind of change to our country.

God expects us to “Occupy til He comes.”  So let’s not get down; let’s pick ourselves us and continue to make a difference in the world.  There are some things the election did not change.

Music Is A Powerful Tool: Use It Wisely