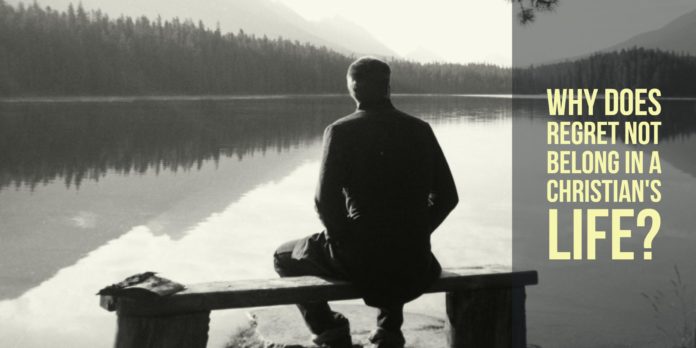 I wish I could go back and change it.

How many times has that thought crossed your mind? If you are like most people, then you probably cannot begin to count how often you have wished you could undo the past. Regret haunts us all, sometimes daily, and keeps us from enjoying our lives as fully as we ought.

I hate regret. But as carefully and wisely as I try to live, I find that life is filled with mistakes and choices I wish I could change, however big or small. A few weeks ago I was driving home from work and found myself thinking about a decision I had recently made that I regretted. As I did, I found myself thinking about what regret is and what role it should play in the Christian’s life. I do not want to live a life of regret, but when I do make mistakes, how do I overcome the regret that follows as I move on with my life? This led me into a study of regret and God’s view of it.

Regret is sorrow—sorrow over something you cannot change. Webster’s dictionary defines it as “sorrow aroused by circumstances beyond one’s control or power to repair.” I regret the past because I do not have the power or control to repair it. I cannot go back and undo it. I cannot change or fix it. Regret is different from remorse. Remorse is sorrow over the mistake itself. Regret is sorrow over the inability to go back and fix that mistake.

Regret often lingers after remorse has passed. As a Christian, when I sin or make a mistake, I know that when I confess it to God, He forgives it. I do not have to live in remorse but can live in forgiveness. Yet I still find myself living with regret. Yes, I sinned and God forgave my sins, but I still sorrow that I cannot go back and undo that sin. I sorrow that I cannot repair or change the past and the consequences that have followed.

But regret does not belong in the Christian life.

Regret is a human emotion, produced by sin. There was no regret in the Garden of Eden. Can you imagine living in paradise, never second-guessing your choices, never wishing you could do it all over again, never sighing over the past? That is how Adam and Eve lived. They had nothing to regret, until they disobeyed God. I cannot begin to imagine the regret Adam and Eve struggled with after the fall—if only I had not listened to the serpent, if only I had obeyed God’s commandment, if only I had said no. They brought sin and death not only upon themselves, but upon all of humanity and creation. And there was nothing they could do to repair it.

But God could. When Adam and Eve sinned, God did not wallow in regret. He did not sorrow over His lack of control to repair what had happened. No, He offered them His solution, His plan of redemption.

There is no regret with God. God does not regret—He does not look on any circumstance with sorrow aroused by His lack of power to repair it. God has control over all things, even your mistakes. There is nothing He cannot change. There is nothing He cannot repair. We do not have the power or control to change our mistakes, so we sorrow over them. But we fail to realize that God has all power and control and can repair every mistake we have made—if we will let Him.

The problem is we have the wrong idea of what it means to repair, to change, our mistakes. We look back on our mistakes with sorrow that we cannot undo them. But God does not. He looks forward and sees how He can use them to change our futures. God can repair every mistake you have made. But He does not do it by turning back the clock and changing your past. He does not allow you to go back and make a different choice. No, He repairs your past by repairing your future.

Adam and Eve had every human reason to live with the deepest regret for the rest of their lives. God offered them a way to set their regrets aside. Adam and Eve could not repair their mistake—but God promised that He would. He did not do it by letting them go back and change the past. He did it by using their past to change their futures. The serpent had deceived Eve—her seed would crush the serpent. Adam brought death into the world—the second Adam would bring eternal life. Sin separated man from God—faith would reunite them. They caused damnation—He promised salvation. He took their mistake and offered to repair it by redeeming it. All they had to do was believe.

Over and over again through Scripture, we see God redeem regrets. One of my favorites is the story of David and Bathsheba. King David committed adultery with Bathsheba, murdered her husband, and tried to hide his mistake. When he was confronted with his sin, he could not go back and change his past. When God took his baby boy away from him, David could not bring him back—nor did he try. David did not have the power or control to repair his past—but God did. God took David’s mistake and used it to change his future and redeem his past. He gave David a son—through Bathsheba—named Solomon and, through his line, Jesus, Who would redeem all sin. Had David not made that mistake, Solomon would never have been born, and Christ would have had to come through another line. But God chose to use David and Bathsheba. He used David’s sin to redeem it.

There’s the key—we have to let Him. We have to allow God to repair our mistakes. We have to give God control. Remember, regret is sorrow over our lack of control. Why do we sorrow over our lack of control? Pride. We do not want to give up our power, our control over our lives and circumstances—so we sorrow when we lose that control. Even when we know that we cannot possibly gain that control, we continue to hold on to it through regret. We keep grasping, keep reaching for the power to fix what we have broken. But we will never attain it.

So how do we overcome regret? We overcome our sorrow over our lack of control by giving God the control. It’s time to give it all to God. It’s time to surrender your past, present, and future to the only person who has control over it all. It’s time to stop relying on ourselves and start trusting God to work all things together for good. He has the power to repair your past, if you have the faith to let it go.

Original article can be found at http://amyhyles.com/2013/11/07/overcoming-regret/

5 Ways To Increase Your Results When Soulwinning

Treatment & Prevention For A Calloused Heart

The Financial Support of Church Planters

A Challenge For All Men: Be Faithful