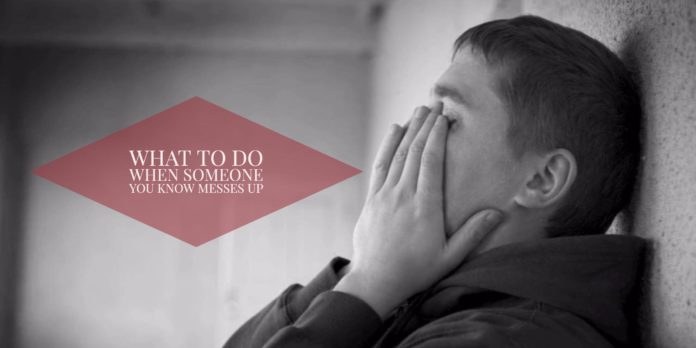 All of us in the work of the Lord have had the sad experience of watching a friend of ours get off-track or even make a shipwreck of their lives. It is always interesting to me to watch the responses to such tragedies. Some are smug: “I knew it. I could tell something wasn’t right. I warned him!” Others are scandalized: “I can’t believe it! How could anyone do such a thing? I am totally shocked.”

Others are sad.  Dr. Shelton Smith, editor of the Sword of the Lord, once said to me about a brother who had gone off-track:  “Every time I think about it, it makes me want to cry.”  What a godly response!   Others are sympathetic: “Well, you know, that could happen to anyone. There but for the grace of God, go I.”

The Scripture response is given to us in Galatians 6:1:  “Brethren, if a man be overtaken in a fault, ye which are spiritual, restore such an one in the spirit of meekness; considering thyself, lest thou also be tempted.”  I am told that the word “restore” is a word that was used in reference to repairing a boat.  The idea was to take a vessel and make it seaworthy again; to restore it to its condition of original usefulness.  (Let me be clear.  While we may always  be restored to our relationship with God, there are some responsibilities that we can forfeit by our sin.

I have told my people on more than one occasion, “If I commit adultery, fire me.” Many years ago, I watched a program hosted, I think, by Peter Jennings, in which he led a panel discussion of Christian leaders.  The most conservative of those was Jerry Falwell.  The question was asked if a preacher could commit adultery and stay in the ministry. One preacher, who had committed adultery, said yes.  Jerry Falwell called that preacher by name and said, “There is no New Testament example of it.”

Another read from Proverbs 6;16, 17 the seven things that God hated. He then went on to say, “And adultery is not on the list!  It’s not on the list!”  Yet another gently chided him by saying, “I would remind my brother that there is another list in Exodus of Ten – and adultery did make it onto that list.”)

Here are a few thoughts on maintaining a Scriptural relationship with our brothers and sister who stumble.

1.  Determine your role in the situation.

If I were merely an acquaintance of the individual, a phone call, an email, a note, or a text may be all that is appropriate for me. If I were a close friend, perhaps I should endeavor to maintain regular contact. If I had been in a position of giving advice and encouragement, maybe the Lord would allow me to be a part of his restoration.

2.  Pray for those who have been hurt by the sin.

Often, in our effort to help one who has done wrong, we fail to consider those who have been damaged by his or her wrong.  There may be a spouse, children, or church members who are deeply wounded. The Devil will, no doubt, try to use the fall of a leader to discourage the hearts of the followers.  (Zechariah 13:7 – “Awake, O sword, against my shepherd, and against the man that is my fellow, saith the LORD of hosts: smite the shepherd, and the sheep shall be scattered: and I will turn mine hand upon the little ones.”)

3.  Reach out to those who are hurting when appropriate.

Many times I have been prompted by the Holy Spirit to call one who has been damaged by the failure of another only to learn that God had directed my attention to come at a particularly needful time in his life.

One individual whom I had endeavored to help said to a relative of hers, who was a pastor friend of mine, “It seems like nobody really cares.  Bro. So-and-So calls, but he’s an information-digger.”  So many times we become like rubberneckers at an accident:  both appalled by and eager to learn all the details possible.

In I Corinthians 10:13 it says that “There hath no temptation taken you but such as is common to man: but God is faithful, who will not suffer you to be tempted above that ye are able; but will with the temptation also make a way to escape, that ye may be able to bear it.” it is clearly saying that none of the temptations we face are unique to us, but are common to all men.  That must, conversely, mean that any of the temptations that come to others could come to us.  The moment we feel that we are above a certain behavior, we have become particularly susceptible to that exact sin.

I do not know how many times a former preacher friend has said to me, “You’re the only one who calls.”  “Nobody else cares.”  Or something similar.  A preacher friend I was with recently told of an evangelist who had back surgery.  The doctors left some surgical implement in his back, causing him great pain.  When the problem was finally discovered and corrected, he was given Oxycontin, to which he became addicted.  After losing his church, his wife, and virtually everyone who had been an important part of his life, my preacher friend continued to love and reach out to him.  He said, “You’re the only friend I have left.”   It is my view that we need to keep a bridge between ourselves and those who have fallen.  They may not choose to do so, but if they want to, there will be a way for them to travel back to the place of faithfulness they once left.

They were a nice couple in their middle years when I visited their home. The man told me their story.  After being saved in jail, he went to Bible college and started two churches, one inAlaskaand one inMichigan.  In his own words, “My wife told me to leave the house once too often.”  He not only left, but took a lady in the church with him.  In a bizarre turn of events, the wife he left wound up marrying the husband of the woman with whom he left.  He and his new wife had been out of church for 19 years when I visited them.  “Would you,” he asked after telling me his story, “allow us to come to your church?”

“Of course,” I replied.  “The church is a spiritual hospital. We don’t kick out the sick people. We try to reach them.”
That dear man was in our church for several years before he died.  He was a model of Christianity, generosity, faithfulness, and service. Many of the children in the church looked to him as a grandfather. Every testimony he gave was used of God to touch hearts. His ministry in the jail resulted in hundreds of people coming to know Christ as their Savior.  His widow still attends our church. While some would have preferred to not have the “baggage” of his life attached to their ministry, I will be forever glad that we obeyed the Bible and were used of God to have a part in the restoration of this dear man . . . for what it’s worth.

Original article can be found here

The Power of Praise in People’s Lives