Some Things You Just Don’t Need To Pray About 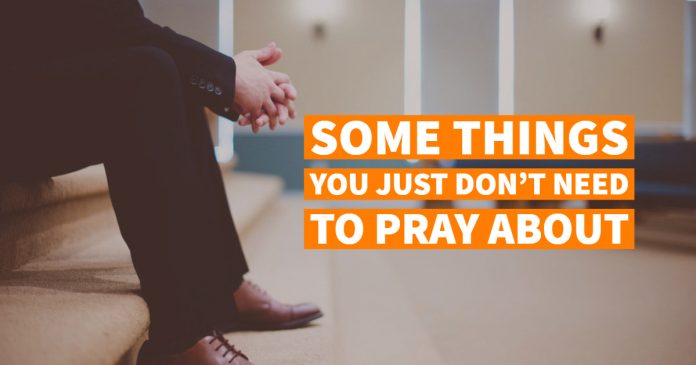 Years ago when Nina and I moved to Living Waters Youth Camp in Hayden, Alabama to serve the Lord with the Ragland family. Brooklyn was a baby and we literally had no financial support at the time. We were going to serve as home missionaries and looking back now, the line between faith and foolishness seems extremely blurry. However, we learned more about the faithfulness of the Lord in six months than I dare say we would have in six years, had we followed conventional wisdom.

Bro. Mike, the director of the camp, came and looked at it and agreed with our assessment. We could no longer count on our refrigerator. So, naturally, I started trying to figure out how we could live without one. It was winter, in fact. And, it got pretty cold inside the trailer. It had those old roll-out windows, all of which had broken, were missing the handle and/or just wouldn’t roll completely shut.

As I once heard a country preacher from North Carolina say, “You could throw a cat through any one of those windows.”

I believe it was the next evening, either a Sunday or a Monday, when we heard the Raglands arriving home from evening service or a special meeting. But instead of parking their truck in its normal place, it sounded like they were backing up to the trailer door. Sure enough, ten seconds later, we heard a knock on the door and Bro. Mike asked if I could come help him with something. When I opened the door, he was loosening the strap to a large, refrigerator size cardboard box.

I asked what was in the box and he said, “Your new refrigerator.” Dumbfounded I stood there having previously no expectation of receiving such a costly appliance, from anyone. I replied with surprise saying, “Thank you, but you didn’t have to do that.”

You know what he said? “Some things you just don’t need to pray about.”

I’d never heard that before, but it makes sense. Think about what James wrote, “Therefore to him that knoweth to do good and doeth it not, to him, it is sin.” James 4:17

Jesus didn’t have to pray about whether to heal the man’s hand on the sabbath day.

The man needed his hand restored. Jesus had the power to do it. Why wait? Why debate the finer points of the sabbath day?

He was Lord of the sabbath, by the way. The sabbath was created for man, not the other way around. The man needed his hand to work so that he could get a job and provide for his family. He was obviously suffering on various levels. Jesus healed him, thumbed his nose in the religious elite’s face, and by doing so said, “Some things you just don’t need to pray about.”

There are times when there should not be any more meetings, or deliberations, or wavering, or pondering, or planning.

Don’t get me wrong. Don’t think that I am saying that we could use this decision not to pray as a guise for doing whatever we wish. No, we are speaking in terms of clear-cut needs of others or personal duties towards or towards God.

Let me go on record to say that tithing falls into this very category.

You don’t need to pray about whether you should tithe. God has no desire to answer that prayer because he has already clearly stated His opinion.

God’s Word is crystal clear on the matter. Various authors in various books spell it out for us in the Bible. We must honor the Lord with the first-fruits of our increase. You don’t need to pray about it. You just need to do it.

Here’s another one for you. You don’t need to pray about whether you should faithfully attend worship services in a local biblically sound church.

Listen to what D. Martyn Lloyd-Jones says about this same subject in his book on Spiritual Depression:

Constantly I find myself having to ask people this question – they come to me about some problem or difficulty and they say: ‘I have been praying about this’, and I say: ‘My friend, do you realize that your body is the temple of the Holy Ghost?’ That is the answer. I say it again at the risk of being misunderstood, but such friends in a way need to pray less and think more.

Let’s pause there in the middle of the quote to let the last part settle in our hearts. He said that in some respects and in some situations, we need to pray less and think more. God gave every one of us good sense, and He fully expects us to use it.

Do you ever wonder why the Lord seems to be ignoring some of your prayers? Is it that He has already answered them? Is it that He simply wants you to think about it for a moment and arrive at the proper conclusion? We shouldn’t have to be force fed in prayer.

When I can, should I help others? Think about it, please. Let’s look back at the rest of the Lloyd-Jones quote, for the full effect.

Don’t be one of those people who as a ruse say they are praying about something simply because they have already fallen into the desperate and defeated category.

The Miracle of Prayer