Home Articles The Value Of One

Psalm 142:1-4, 1“I cried unto the LORD with my voice; with my voice unto the LORD did I make my supplication. 2I poured out my complaint before him; I shewed before him my trouble. 3When my spirit was overwhelmed within me, then thou knewest my path. In the way wherein I walked have they privily laid a snare for me. 4I looked on my right hand, and beheld, but there was no man that would know me: refuge failed me; no man cared for my soul.”

John 5:7, “The impotent man answered him, Sir, I have no man, when the water is troubled, to put me into the pool: but while I am coming, another steppeth down before me.”

In the 142nd Psalm, David was in the cave while Saul, who vowed to kill him, chased him. David said ‘I looked on my right hand and refuge failed me and no man cared for my soul.

One man, Shamgar, took an ox goad and killed six hundred Philistines. One man, John Knox, saved Scotland. One man, D. L. Moody, heard it said that the world has yet to see what God could do with one man totally sold out to God. On man, Aaron, stood between the living and the dead.

John Knox saved Scotland, D. L. Moody saved America and England, Billy Sunday saved America, and Charles Spurgeon was used of God to save England. Apparently, one man can make a difference. The value of one!

I fear that we cry ‘God save America’ when we should be crying ‘God saved Joe, Joyce, Harry, Susan, Sam, Carol, Mary, George, Elizabeth, Billy, Harriet, Tom, Rose, and Jack.’

Jeremiah 5:1, “Run ye to and fro through the streets of Jerusalem, and see now, and know, and seek in the broad places thereof, if ye can find a man, if there be any that executeth judgment, that seeketh the truth; and I will pardon it.”

It appears that young men of God desire to be a D. L. Moody, Dr. Lee Roberson, Dr. Jack Hyles, Dr. Curtis Hutson, Dr. Tom Malone, or a Dr. John R. Rice when, in reality, they should realize that anyone can win anyone to the Lord and attract the attention of the God of Moody. If I can just win ONE man to Christ, I will attract God, and He is the One who will accomplish the work. God does not need a bunch of talented “pretty boys” to spare America. God does not need a bunch of physical specimens to save America. ONE man seeking the truth, trusting Christ, and any modern-day Nebuchadnezzar can be stopped.

What God desires is for someone to run through the streets looking for ONE person seeking the truth. Lot didn’t, Lot’s wife didn’t, Lot’s daughters didn’t, Lot’s in-laws didn’t, and what was the result? God destroyed Sodom and Gomorrah. God did not say that if someone could just sing like Ray Hart or Paul Duckett He would spare the city. He said if anyone would just win one He would do His part to spare the city. Young man of God, you may not be able to preach like an R. G. Lee, but you can go up and down the streets of your city looking for ONE man seeking truth and give him that truth.

Jeremiah, run up and down the streets, go from house to house, person to person, in the alleys, and in the highways looking for just ONE person seeking truth and give him that truth.

Unfortunately, the cry today is for “revival” which folks believe will result in souls saved. NO, NO, NO, and another NO! Winning souls is right even if there is never a revival! With this “revival” logic, we can sit on our duff and blame God if people do not trust Christ! God’s children are to win souls regardless of the circumstances or lack thereof! Soul winning precedes revival. Revival does not precede soul winning.

Someone says, “God’s never going to give revival until everyone in the church is right with God.” My dear friend, in that case, there will never be revival! So, if God doesn’t move in and bring revival, we can, obviously, blame God and we are free of blame. Then God’s people can sit and wait! NO! Mark 16:14-15, 14“Afterward he appeared unto the eleven as they sat at meat, and upbraided them with their unbelief and hardness of heart, because they believed not them which had seen him after he was risen. 15And he said unto them, Go ye into all the world, and preach the gospel to every creature.”

From Mark 16 to Acts 2, the local church grew from 11 to 120, and that was accomplished in 50 days! That’s not bad! The truth is, soul winning is right whether there is revival or not. What happened after they obeyed the command to personally win souls? The HolySpirit came upon them and revival broke out! Too many are sitting in their church pews or standing on the front porch of the church thinking ‘today might be the day for our Pentecost’. Yet, they have never knocked on a door or gone up and down the streets looking for ONE man seeking truth and then given him that truth.

The Scripture doesn’t say what profession. He just says find someone seeking truth and give him truth. Think about what ONE man could have prevented. ONE saved woman or man could have spared the destruction of Nebuchadnezzar’s army. The mightiest fighting force on the face of the earth could have been stopped by ONE salvation decision of a man or woman.

If Lot, or his family, had just won ONE person to the Messiah, then Sodom and Gomorrah could have been spared. AMAZING!

This is amazing! Jesus is saying if ANY man … not the staff, the deacons, school teachers, college staff, assistant pastors … but ANY man … will open the door, He would come in! Someone said, “As long as one person in the church is not right with God we’ll never be blessed of God.” That’s incorrect! God says the opposite because, according to God, all it takes is ONE man to open the door.

Matthew 16:18, “And I say also unto thee, That thou art Peter, and upon this rock I will build my church; and the gates of hell shall not prevail against it.”

Luke 15:7 “I say unto you, that likewise joy shall be in heaven over one sinner that repenteth, more than over ninety and nine just persons, which need no repentance.”

Luke 15:10 “Likewise, I say unto you, there is joy in the presence of the angels of God over one sinner that repenteth.” 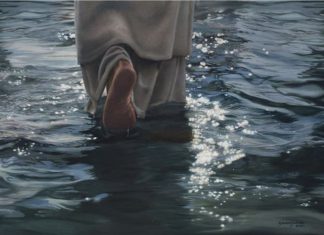 "Let us keep looking to Jesus as our focus and fervent hope, while responding to his rebukes and rejoicing in His commendations."