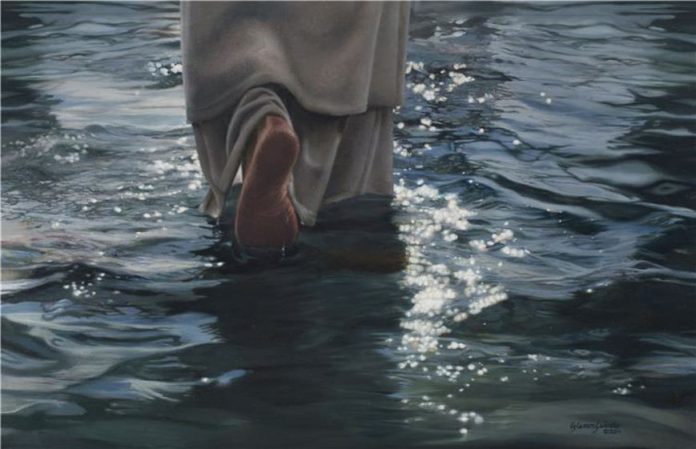 Pessimism considers Peter to be foolish for getting out of the boat. Criticism notes that Peter began to sink. Realism sees that Peter got out and walked on the water, and that he was the only disciple to do so.

First, Peter got out of the boat in the middle of the lake, the place of greatest depth.

Mark’s version of this same event (Mark 6:47) states that …the ship was in the midst of the sea,… corroborating what Matthew states in Matthew 14:24. Topographic maps show that this freshwater lake is deepest (about 140 feet) near the middle. At its broadest, this lake is about 8 miles wide. Peter did not get out where he could easily wade or swim ashore. Even in calm waters, a four-mile swim would challenge the capabilities of all but the best swimmers. In this storm, that challenge likely would have been impossible.

Second, Peter got out of the boat in the middle of the storm, the place of greatest danger.

This was not a hurricane with an eye of calm air in the middle. According to Mark 6:48, this was one of the Sea of Galilee’s contrary-wind storms that whipped up frothy, choppy waves and threw the watercraft in myriad directions. Matthew 14:24 also stated that …the ship was…tossed with waves: for the wind was contrary. Contrary winds are winds from several directions sweeping down upon unsuspecting sailors and catching them unawares. As Peter stepped from the boat onto the surface of the water, his footing was tossed first this way, then that by the raging of those waves.

Third, Peter got out of the boat in the middle of the night, the place of greatest darkness.

Mark 6:48 agrees with Matthew 14:25 that this occurred in what is proverbially termed “the middle of the night,” when darkness is the blackest even if skies are clear. Compound that with the complete absence of light from moon and stars, and one begins to comprehend the pall of gloom in that moment when Peter’s feet came into contact with the water.

The boat in this case represents that which gives us an earthly comfort or some human assurance that “all will be well.” In today’s lingo, the boat was the disciples’ comfort zone. Although they sensed danger in the boat, they all thought greater danger lurked beyond its bilges. All of them stayed there—except Peter—sensing that abandoning the ship was the quickest way to a watery grave.

Some never get out of the boat because of their fear of water.

This is pure unbelief. It is trust in what is manmade. It is trust in what holds up when there is no depth, danger, or darkness. Most saints are quite good at living for God when they can wade in the stream, when they can see the path, and when the light is bright. A few, as Peter in this glorious story, learn how to live for God when all that they face overwhelms, overcomes, and overpowers them!

Some never get out of the boat because of their fear of failure.

Peter failed halfway to Jesus, but he was out of the boat! Peter was closer to Jesus when he failed than any of the other disciples. It seems likely that the eleven were focused upon Peter’s beginning to sink more than they were focused on their failures to heed Jesus’ word, …Come. It seems likely that many, if not all of the other disciples well may have even attempted to physically prevent Peter or verbally convince Peter not to leave the vessel. What stands out are their failures in the boat rather than Peter’s failure outside of the boat. Not one of them is recorded as having approached either the Lord or Peter to offer a confession of his failure or a congratulations for Peter’s success.

Some never get out of the boat because of their fear of rebuke.

Peter was rebuked. Jesus addressed him as …O thou of little faith,… and asked him in Matthew 14:31, …wherefore didst thou doubt? In retrospect, far better is he who is rebuked for little faith than he who is rebuked for no faith! Wise and prosperous is the child of God who welcomes the Lord’s rebukes, who exposes himself to them, and who even prays and asks for them. Such a child of God is on his way to learning, to growing, and to improving.

Some never get out of the boat because of their fear of death.

Most of the religious of the world keep their followers captive with threats of death in Hell if they ever forsake said religion. Aspects of this fear of man and fear of death often maintain a grip on individuals after they are saved. Forgetting that earthly death is the gateway to heavenly life, many of God’s true children (by faith in Jesus Christ’s atoning blood) will cling to and clutch at some religious tradition after they are saved just as millennial snowflakes hang onto their fidget spinners.

The world is a location of death. That cannot be changed until full and final deliverance at the resurrection! It is not an option. Death is all around us. The option is which death we will choose. Peter chose death to self, death to sense (man’s sense), death to safety, death to suspicion, and death to solace (earthly solace). The eleven chose death to surrender, death to sanctification, and death to service to Christ. The flesh and the devil himself seek to distract God’s saints from one death by dangling another more frightening-looking death in front of them! God give us a generation of Psalm 23:4 believers who fear no evil though they walk through the valley of the shadow of death!

We must hear Jesus’ word, …Come. We must identify our boat, get out of it, walk on the water, and go to Jesus. We must keep our eyes on Him. If we fail, we must take His rebuke as a humble child. If we succeed, we should not gloat but glorify God. Then, repeat. That is the truly successful Christian life. Let us keep hearing Jesus’ invitation to come. Let us keep identifying our boat and keep getting out of it.

Let us keep looking to Jesus as our focus and fervent hope, while responding to his rebukes and rejoicing in His commendations. Let us keep repeating this until we see His face.

Be Careful What You Pray For

Three Enemies To Your Soul

The Kind of Preaching We Need