God Uses The Broken Too 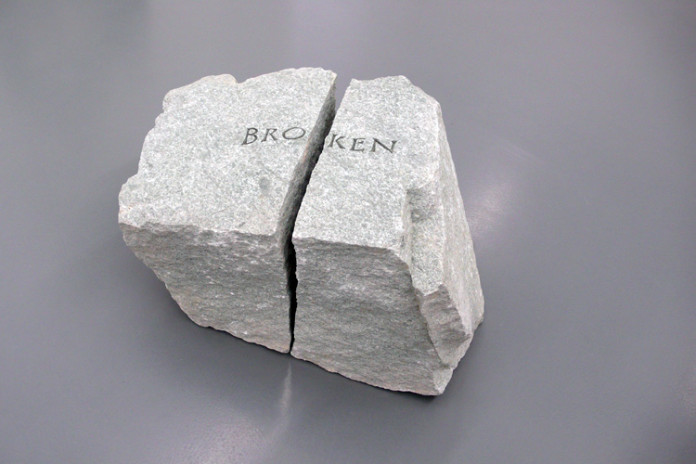 I woke up insanely early this morning and headed out the door to my favorite coffee shop as turned on the radio and began listening to a woman discussing brokenness. I identified with much of what she had to say. Although I can’t remember her name, I remember many of her points that resonated with me. It’s easy for our hearts to “amen” someone that is being transparent and vulnerable when they’re teaching. “Perfectness,” although there’s no such thing outside of Jesus Chris, doesn’t exist.

She shared the story of her grandmother’s china crashing down from her cabinet and what a heartbreak it was for her due to the china being irreplaceable. She later discovered six plates inside a little vintage shop that greatly resembled those she had lost. When she noticed a hairline crack in one, she turned it over and noticed that it was stapled back together. Finding that odd, she took it to the cashier and asked why it was stapled. “What’s the point?” she asked. The cashier stated that in the Victorian era, the options were to either eat off of boards or china. What would you rather eat off of?

I’m not perfect; I’m far from it, and those who know me best will amen it; I’m okay with that. Perfection is found in Jesus Christ alone. If God, who is the only perfect father, didn’t create perfect children, what makes us think we can? Despite pressures felt by others with condemning words and looks, I determined many years ago to love my daughter exactly how she is – flaws, hairline cracks, chips, brokenness, and all. That’s how Jesus loves me. That’s how He loves you. My daughter is saved and she’s a good girl. She also happens to be very broken, carrying burdens greater than I’ve ever had laid at my door. She’s also learned from them and is stronger because of them. She and I have become great friends, particularly over the last four years.

He used the broken commandments to teach His perfection. (Ex. Ch. 20)
He used the broken bread to nourish and sustain the multitude. (Matt. Ch. 15)
He used the woman broken by adultery to demonstrate His mercy and grace. (John Ch. 8)
He used the thief on the cross, broken with humility, to show His immediate forgiveness. (Luke Ch. 23)

We seem to think that people must be perfect in order to be used of God. Not so! Would God rather use a clean vessel than a dirty one? Absolutely! But God is in the business of restoration and redemption. He can use anyone! He loves the broken things!

Can He use a teenage pregnancy to help teach others? Can He use the loss of a baby to help another?

Can He use a broken marriage to guide others? Can He use the failings and shortcomings of one to help another? or multitudes? Of course He can!

Many people mistake those of us with convictions as being pharisaical. Just because I adhere to my beliefs with conviction and have a Biblical basis for my beliefs, it doesn’t mean I don’t accept others where they are. My daughter had two classmates many years ago that were twin brothers and they were gang members. Their families were so involved with gangs that they’ve never been able to have normal family functions due to their rivalries. These boys were raised in this environment; it was all they had ever known. I once asked one of them about his jeans that looked new, supposing they had been a Christmas gift since it was December 26th when I saw him. “We never get anything for Christmas,” he nonchalantly stated, unmoved by emotion. I said, “What?” He repeated himself.

I stood silently and eventually excused myself, went upstairs, and quietly cried. I told my husband later that evening, “That stops this year!” These kids would work cleaning theaters until 3 AM and then get beaten for falling asleep in class the next day. Though hardened exteriors, if you would’ve poked a toothpick in them it would’ve come out soft and mushy inside; they aren’t done! These “tough kids” would run up to me in the grocery store just to give me a hug. Being in their mid-teens, that is nearly unheard of, especially for such “bad” kids. They weren’t bad; they were BROKEN. And they knew I loved them.

One person, just this week, labeled me “Mrs. God.” She meant it as a derogatory cut to my soul, but it’s as good of a nickname as any other. She slung it in my direction because I adhere to Biblical principles. That doesn’t mean I look down upon those in their current state; however, to those who try to excuse their sin while embracing and promoting it, it is abrasive to their conscience when others won’t jump aboard and applaud it.

No, Ma’am… I’m not perfect. I’m very much broken. But I’m thankful that God uses the broken things.

Jesus’ body was broken upon the cross. His Father “stapled” it, just like that broken china, so we could have the finest of the fine, rather than just the boards.

“Mrs. God,” you say? Thank you, Ma’am. Though unworthy, I’ll take it. We are, after all, His bride. There is no better nickname possible to have been assigned. By the way, those two boys – the gang members – both got saved in the middle of the street one evening when my husband and I were out soul winning. We hadn’t even realized upon meeting them that these were the two young men that our daughter had been telling us about. Isn’t God good?!

We should be careful how we nickname and label, for God loves the broken things.

1 Pet. 4:14 – “If ye be reproached for the name of Christ, happy are ye; for the spirit of glory and of God resteth upon you: on their part he is evil spoken of, but on your part he is glorified.”

Why It’s Important To Have Correct Bible Doctrine

Do We Have Time To Mentor?