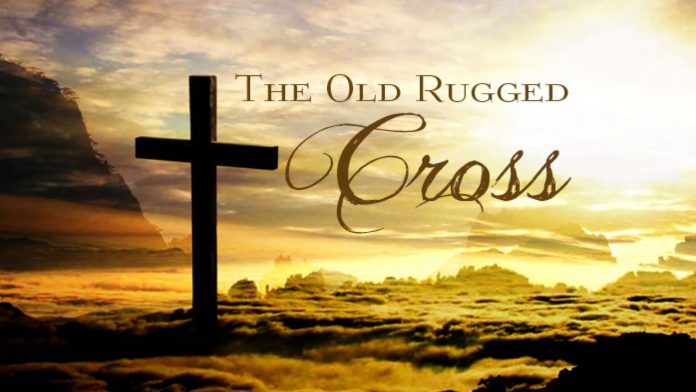 During the early years of his ministry, Rev. George Bennard was “praying for a full understanding of the cross and its plan in Christianity.”

Consequently, he spent many hours in study, prayer and meditation, until he could say, “I saw the Christ of the cross as if I were seeing John 3:16 leave the printed page, take form and act out the meaning of redemption.”

During these days the theme of what was to be his most successful song came to him.

He was staying in the Methodist parsonage at Pokagon, Michigan, while engaged in series of service in the Pokagon Church when he finally perfected his song and wrote down the words and music.

“Old Rugged Cross Day” is observed annually at this Church, and on a large stone nearby is carved the names of the original singers and the significance of the event.

Introduced before a large convention in Chicago, its fame spread rapidly throughout the Christian world.

Today, a twelve-foot high wooden cross stands on a roadside near Reed City, Michigan, honoring the composer.  On it are the words ‘Old Rugged Cross.”  A sign reminds passersby that this is the “Home of Living Author, Rev. Geo. Bennard.”

On a hill far away stood an old rugged cross,

The emblem of suff’ring and shame;

And I love that old cross where the dearest and best

For a world of lost sinners was slain.

Till my trophies at last I lay down;

I will cling to the old rugged cross,

And exchange it some day for a crown.

On that old rugged cross, so despised by the world,

Has a wondrous attraction for me;

For the dear Lamb of God left His glory above,

To bear it to dark Calvary.

In that old rugged cross, stained with blood so divine,

A wondrous beauty I see;

For ’twas on that old cross Jesus suffered and died,

To pardon and sanctify me.

To the old rugged cross I will ever be true,

Its shame and reproach gladly bear;

Then He’ll call me some day to my home far away,

Are You Sure He Is Able?

The “Silent Treatment” and Christians

Does Ultra Free Grace Give You A License To Sin?