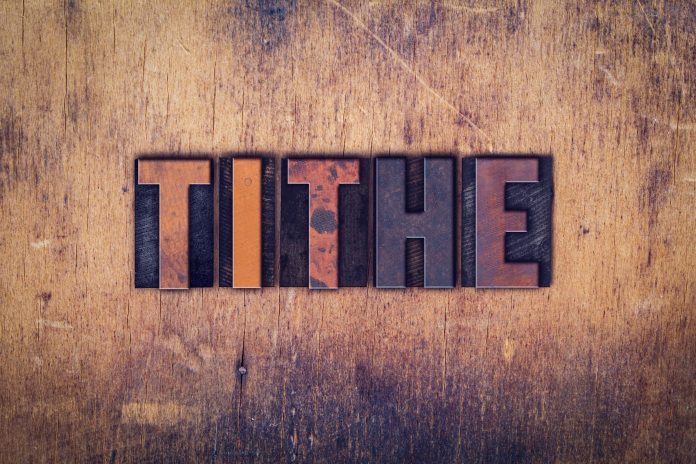 Tithing is a practice often neglected today. Often, many would reason that it is only found in the Old Testament Law and thus shouldn’t be practiced today in the New Testament Church.

So here is a New Testament defense of tithing to the church today.

The word “tithe” means “tenth”. It’s a specialized noun form of tenth. So a tenth part of something is a tithe.

So what is tithing? Tithing is a transfer of a tenth back to God after He gives you something.

And this stone, which I have set for a pillar, shall be God’s house: and of all that thou shalt give me I will surely give the tenth unto thee.

God is the One who gives everyone their wealth.

Deuteronomy 8:18
18 But thou shalt remember the Lord thy God: for it is he that giveth thee power to get wealth, that he may establish his covenant which he sware unto thy fathers, as it is this day.

Tithing is not charitable giving. It is more understood to be a form of debt to God for giving you wealth. You can call tithe the interest or usury. You give to charities. You don’t give to the IRS or your school loan agency or your bill collectors, you owe the IRS, your school loans, and your bills. Nowhere in the Bible does the tithe ever been equated with charitable giving.

This is why verses on voluntary, compulsory giving in the New Testament do not apply to tithing. While you can in a way “voluntary” pay your debts, there are consequences. Voluntary charitable giving has no such consequences.

When was the first tithe?

The first time we see tithing is in Genesis. Abraham gives tithes to Melchizedek, king of Salem.
Genesis 14:20
And blessed be the most high God, which hath delivered thine enemies into thy hand. And he gave him tithes of all.

The second time in the Bible we see tithing is 14 chapters later, where Abraham’s grandson Jacob makes a promise to tithe to God:

Genesis 28
20 And Jacob vowed a vow, saying, If God will be with me, and will keep me in this way that I go, and will give me bread to eat, and raiment to put on,
21 So that I come again to my father’s house in peace; then shall the LORD be my God:
22 And this stone, which I have set for a pillar, shall be God’s house: and of all that thou shalt give me I will surely give the tenth unto thee.

Why is this important? It is important because it means people tithed long before the Levitical law was instituted.Things that are eternally moral or immoral are spoken of or commanded long before the Law was given. We hear how murder is wrong from Cain’s sin. The Law didn’t have to tell us that. God then institutes the death penalty after the Flood. While the Law has specific death penalties, all governments today have some form of death penalty. The death penalty came before the Law. We also know that fornication and adultery and such other sins are wrong from Genesis, and why it is a big reason why God sent the Flood on Earth. The Law reiterated that.

Jesus Himself uses this line of reasoning. He reasons with the Pharisees concerning marriage and divorce not from the Law, but from before the Law:

Matthew 19:4
And he answered and said unto them, Have ye not read, that he which made them at the beginning made them male and female,

So in light of that line of reasoning, why one should tithe today, is because it was done from the beginning before the Law.

Furthermore, as Gentile Christians, we are considered children of Abraham. If you’ve ever sang the the song “Father Abraham” in Sunday schools or bus, this is what is being referred to:

Galatians 3:7
Know ye therefore that they which are of faith, the same are the children of Abraham.

As a side note, some may see that as to mean that the Church replaces or unites with Israel. That is not so. For one, Abraham was a father of many nations, not just Israel. He fathered many of the Semitic nations we see today. And the Bible calls the Church another nation which is also not a nation. It’s complicated. At any rate, the verse isn’t saying the Church equals to or identical to Israel.

The important thing to see is that all children of Abraham tithe. Abraham tithed. Jacob tithed. Abraham was a Gentile before he became a Hebrew, and tithed when he was a Gentile. And we see in Hebrews, all descendants of Abraham tithe:
Hebrews 7
7 For this Melchisedec, king of Salem, priest of the most high God, who met Abraham returning from the slaughter of the kings, and blessed him;
2 To whom also Abraham gave a tenth part of all; first being by interpretation King of righteousness, and after that also King of Salem, which is, King of peace;
3 Without father, without mother, without descent, having neither beginning of days, nor end of life; but made like unto the Son of God; abideth a priest continually.
4 Now consider how great this man was, unto whom even the patriarch Abraham gave the tenth of the spoils.
5 And verily they that are of the sons of Levi, who receive the office of the priesthood, have a commandment to take tithes of the people according to the law, that is, of their brethren, though they come out of the loins of Abraham:
6 But he whose descent is not counted from them received tithes of Abraham, and blessed him that had the promises.
7 And without all contradiction the less is blessed of the better.
8 And here men that die receive tithes; but there he receiveth them, of whom it is witnessed that he liveth.
9 And as I may so say, Levi also, who receiveth tithes, payed tithes in Abraham.
10 For he was yet in the loins of his father, when Melchisedec met him.

Here, it clarifies that Jesus is part of the Melchizedek line of priests, not the Levitical line. In verse 8, it says that we tithe to Christ today as He lives forever.

Levi’s descendants tithed to Melchizedek while Levi was in Abraham’s loins. Since we are children of Abraham, we practice the same pattern of tithing.

We established through a line of reasoning why tithing is eternally moral to do. So who do we tithe to, practically, today? Why do we tithe to the church?
According to Malachi, tithes go to the storehouse:Malachi 3:10
Bring ye all the tithes into the storehouse, that there may be meat in mine house, and prove me now herewith, saith the LORD of hosts, if I will not open you the windows of heaven, and pour you out a blessing, that there shall not be room enough to receive it. In the New Testament, Paul calls the church house the storehouse.

I Corinthians 16:2
Upon the first day (Sunday) of the week let every one of you lay by him in store, as God hath prospered him, that there be no gatherings when I come.

The reference to the first day, which is Sunday when we go to church, is not accidental. Please refer to my previous article True Bible Reasons Why Church Is On Sunday Not Saturday for the significance of this.

Referring back to Hebrews, the Levitical tithe was made for the service of their office. Also, I Corinthians state Paul asked for tithes for him coming. So it is obvious that while we tithe to Christ, the actual money goes to the priests and church involved in the work.

Note it says as God prospered him. It means whatever was stored in the storehouse, was proportional to income, and not arbitrary. And the only consistent proportion we see in Scripture is, you guessed it, the tenth or the tithe.
So in conclusion, we tithe to the church today because it was established in the beginning before the Law, tithing is not voluntary giving but a debt to be paid, tithes go to the storehouse and Paul said we should and considered the church a storehouse, and because we are children of Abraham following their previous pattern of tithing.
Samuel Garcia
Share559
Tweet5
Share
Facebook
Twitter
Pinterest
WhatsApp
Previous articleThe Old Rugged Cross: The Story Behind The Hymn
Next articleHow To Be A Friend Like Jesus

There Is NO Substitute For Prayer

Imagine A Life Without Miracles

Why The Mature Christian Doesn’t Exist