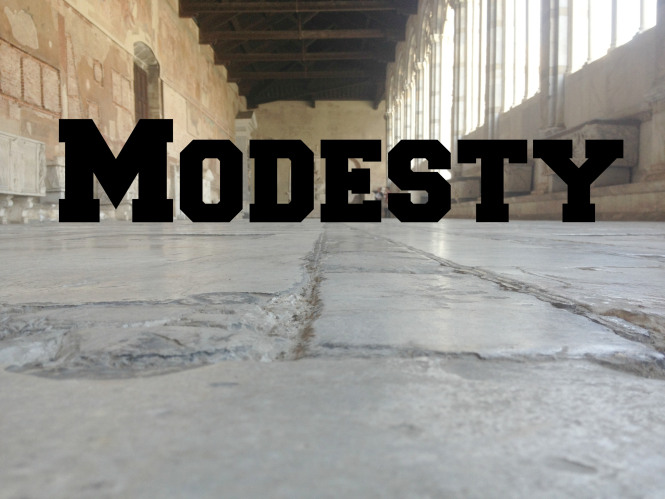 Have you ever heard someone say, “Well, looks aren’t that important? I’m interested in what is on the inside”? That sounds very noble, but deep down it really isn’t true. We do care what people look like, and we do judge people by their appearance, probably more often than we care to admit. Perhaps this isn’t fair, but it is very true. Someone’s appearance creates their first impression on you. But it works the other way around too. Your appearance creates a first impression on others.

Like Mr. Webster, most of us use the words modest or immodest when describing a female. The reason is because the female body is usually admired for its physical appearance and shape, whereas the male body is admired for its strength. That’s not my opinion, that’s just biology. So if biologically men pay closer attention to a lady’s body, than a lady would a man, it makes sense that a lady must pay extra special attention to how she presents herself, so that she does not become “indecent” in her appearance. Just the fact that you are female has placed you under a microscope. The “male microscope” is set to immediately notice two things: skin and curves. Remember, this isn’t sin, this is just biology, and men are made that way. Biology becomes sin, though, when a lady, knowingly manipulates her appearance and clothing so that she will GET more attention for her skin and curves!

Now, I’m sure there are ladies who have dressed a certain way for so long that it’s just their habit and they have no conscious motive of being immodest or being a distraction to men. However, if you have been unconsciously doing something wrong and then the Lord turns on the light for you and shows you Biblically how it’s wrong, then you have a Christian obligation to change.

So how do you change from immodest to modest in your appearance? Do I have to become Amish or something? No! Think about it! If the “male microscope” is set to skin and curves then the trick to modesty would be to cover the skin in loose enough clothing! Simple.

People who lack this trait very rarely see it in themselves because they’ve learned to use other terms for their lack of character. Examine some of these code terms to check yourself for a lack of modesty:

“I’m just really outgoing” code for “I need to always be the center of attention”.
“I’m just really confident” code for “I’m the best at everything so sit and listen to me tell you all about it.”
“I’m just a natural born leader” code for “I have to be in charge or I’m not participating at all!”
Modesty of attitude is painful to correct, but not impossible. Sincerely ask the Lord if you have this flaw. If so, begin to consciously put yourself last in some things. Stop talking about yourself all the time. Try to have an entire conversation with a friend in which you don’t mention one thing about yourself, but keep the entire conversation focused on your friend and their day or their accomplishments or their troubles. Suggest for someone else to be in charge of things, ask others their opinions and this just listen. People with a lack of modesty of attitude also usually talk a lot. Just spend a day being quiet, listening to others and focusing on others.

I suppose when Noah Webster said, “Modesty is the sweetest charm of female perfection” he was imagining a lady with a combination of modesty of appearance and modesty of attitude. Her appearance is not a distraction to those around her and her attitude encourages and includes others. That would be a lovely lady indeed. Let us all strive to be such ladies

Original article can be found at http://reevessarah40.wordpress.com/2013/01/10/why-modesty-matters/

You Need Preventative Maintenence in Your Marriage

What The Disciples Saw Still Affects You