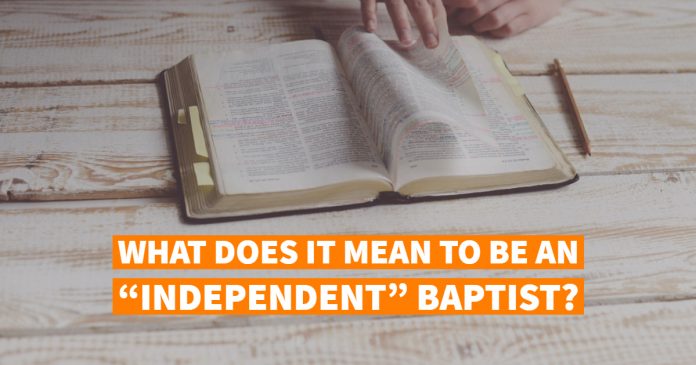 I am an independent Baptist preacher and pastor an independent Baptist church. First and foremost, I am a Baptist in doctrine and practice. I see no reason to divorce myself from a historic name and a doctrinal position that distinguishes me from other groups (who often take Biblical names without adopting Biblical doctrines or practices – i.e., the “churches of Christ” in the New Testament did not teach baptismal regeneration like the denomination that uses this name today). So, first I am a Baptist with a capital “B.” Then, I am an “independent” Baptist.

“Independent” means “Not dependent; not subject to the control of others; not subordinate.” An independent Baptist church is one that is not dependent, subject, or subordinate to any outside organization. This adjective distinguishes and differentiates Lighthouse Baptist Church from those churches that are part of various conventions and organizations. Lighthouse Baptist Church is not part of any convention and recognizes no hierarchy, board, president, religious constitution, or vote by other churches as binding upon itself. Lighthouse Baptist Church is an independent and autonomous or self-governing organization complete in itself, answering directly to its Head, the Lord Jesus Christ. We are governed by His Word, led by a pastor, served by each other. We vote upon our own business and do not recognize anyone outside of the church membership as having any authority over our actions, decisions, or practices.

We believe that the churches of the New Testament were independent churches. They did cooperate with each other in the Great Commission but we do not read of any organizations over the churches or directing the churches.

The churches of history were independent churches. Conventions and Unions are relatively modern. On paper, they seem like good ideas and always have noble goals. In the past, they may have accomplished some good while still recognizing the sovereignty of the churches. In reality, human nature is what it is, and such organizations eventually become political and tend to lord over the churches. And we aren’t even going to mention the doctrinal compromises that fill such organizations over time.

Being independent simply means that our church is unaffiliated and unattached to any convention or denomination. We may have a loose fellowship with churches and pastors of like faith and practice, particularly through certain Bible colleges, youth camps, preacher’s fellowship meetings, missionaries and friendships – but there is no one who has any jurisdiction or authority or say in what happens in an independent Baptist church except those who are a part of that church.

Now, I would like to point out that I believe the word “independent” is sometimes misunderstood even among independent Baptists. For example, a man may say, “We can do whatever we want to, because we are an independent church.” Now, that is true in practice. There is no denominational boss that is going to come and correct what a church does. An independent church can’t be kicked out of something it isn’t a part of.

Just because we have “the right” to do things does not mean that what we do is automatically right.

The seven churches of Asia Minor (Revelation 2-3) were all independent churches (separate, distinct candlesticks – NOT branches on one big candelabra). Each stood before the Lord Jesus and was judged individually and separately from the others. As independent churches, they were going about their business and there is no hint of any human organization over any of them.

Nevertheless, some churches were sound, and some were fallen, and some were falling. Ephesus left their first love and was about to lose their candlestick. Thyatira was suffering a woman named Jezebel to teach false doctrine and lead the people into sin. Perhaps the pastor said, “We are an independent church; who I have teaching is no one’s business.” It was the Lord’s business, and He was about to judge their church. The Pergamos church was also looking the other way while some were teaching the doctrine of Balaam in some of the adult Sunday School classes and maybe in the Christian school. The church of Sardis was independent but on life support. The church of Laodicea was rich, contented, and disgustingly lukewarm.

The church of Philadelphia was a good church with a little strength. They would not be judged by what was taking place in Laodicea, nor would the suffering church of Smyrna.

Independent Baptists need to be careful not to use their independence as a cloak for compromise within the church. No, no one can tell us what to do. No, no one has the right to meddle in our business. But there is ONE who is the Head of our Church, and He expects the church to be about His business of winning souls, baptizing converts, training disciples, and sending out missionaries. He expects to be first place and first love. He expects holiness and separation from sin and worldliness. He expects things to be done decently and in order. He has given us the qualifications for the pastor and the deacons. They are not up for debate. The ordinances are given to us to “keep,” not to adjust or meddle with according to our wishes.

We should also say that independence is not isolationism. The work of God is bigger than any one church. Churches of like faith can work together if they choose to, primarily in regards to world missions and church planting. Churches in a region could help to start new churches in the area. There’s nothing wrong with attending or supporting someone else’s meeting, though I believe that we should attend our own church services during their scheduled times unless sick, out of town, or providentially hindered. Pastors can be friends without giving up their independence. Churches that can’t see past the four walls of their own church or the 10 churches in their own “camp” are missing out on the fact that God still has His 7000 that still haven’t bowed the knee to Baal. And they didn’t all graduate from my Bible college – or yours.

Then, independence gives the church the freedom to carry out missions as it chooses to do so. No one chooses our missionaries for us. Our church meets and votes upon its own and sends the support directly to them. They report back to us. We recognize the authority of their sending church and yet we can work together through our missionaries to reach the world.

The original article can be found here. This post was slightly modified from the original.

Are You Leading Prayer At The End Of Soulwinning

The Harm Of Infant Baptism