Home Christian Living What Are You Preparing Your Heart For?

Going back a solid decade, one of my greatest Sunday frustrations as a pastor showed itself on the days that we had fellowships after church. (I confess that not much has changed since then.) Inevitably, truly desiring to do their part to the best of their ability, many families prepare wonderful meals or desserts to bring to church. I applaud them and am tremendously thankful for their effort and their desire to be a blessing to others, but I don’t applaud them for, in the name of preparation, skipping out on Sunday School. I don’t applaud those who cook all morning long for the homecoming meal and arrive at church half way through the preaching, already having missed all of the prayer time and singing.

I dare say that scripturally speaking, the most important preparation that anyone, pastor or otherwise, can make, daily, is the preparation of the heart.

The leadership of the early church understood this when people began to complain that the disciples were neglecting some of the widows. They responded not by dropping the work at hand, but insisted on enlisting other servants so they could give themselves “…continually to prayer, and to the ministry of the word.” (Acts 6:4)

Please don’t misunderstand this next statement by calling it a selfish or egotistical one, but while the disciples saw the widows as important, they saw prayer as more important. They saw the preparation of their own heart as of supreme importance.

Why? Perhaps they understood what Jeremiah said about that great organ we believe to be the seat of our emotions. “The heart is deceitful above all things, and desperately wicked: who can know it?” (Jer. 17:9)

Perhaps they thought of Solomon’s words in Proverbs 4:23: “Keep thy heart with all diligence; for out of it are the issues of life.”

Or, perhaps they remembered reading of the great revival that took place during Ezra’s ministry. You don’t remember Ezra? Referred to as a “ready scribe” in the Old Testament book that bears his name, he, with the consent of Artaxerxes the king of Persia, led a remnant of Jews from Babylon to Jerusalem to restore worship in the holy city.

Even more notable than all he did during his ministry, the Bible carefully reveals to us that before ever leaving Babylon, before ever asking leave of the king, and before ever teaching others, Ezra “…had prepared his heart to seek the law of the Lord, and to do it, and to teach in Israel statutes and judgments.” (Ezra 7:10)

The Bible describes his as a ready scribe because he was a prepared scribe. Contrary to what some believe, the two are not mutually exclusive. It is no accident that in English the very word, preparation, comes from Latin, via the Old French word that simply meant “to make ready before.” I would put great emphasis on the word, before.

Quickly considering the book of Jonah we see a beautiful example of God’s forethought and sovereignty when we read, “the Lord had prepared a great fish to swallow up Jonah.” (Jonah 1:17) and when we read, “…God prepared a gourd…that it might be a shadow over his head, to deliver them from his grief.” (Jonah 4:6) As great as the Lord’s grace exceeded Jonah’s expectations, His judgment too exceeded those great expectations. The Bible declares that God “…prepared a worm” to smite the gourd and take away Jonah’s blessing. (Jonah 4:7) In the very next verse the Lord prepared a strong east wind to beat against the prophet so much that he wished to die.

However, if there is one thing that God does not prepare for us, it is our hearts. That is solely our responsibility. Let’s look at the verbiage in Ezra 7:10 again. “For Ezra had prepared his heart…” Ezra, not God, prepared his heart.

Please, take this from the message today – If you don’t prepare your heart, no one else will do it for you. If you don’t prepare your heart, it won’t be prepared. If you won’t do it for yourself, I personally don’t believe that God is willing to do it. Under normal circumstances, it is not His nature to do something for us that we are capable of doing.

Remember, it’s a funny thing, that heart of yours. Nothing is more deceitful than your heart. It is the heart that is deceitful above all things. It is unparalleled in its deceitfulness. Think again back to Jeremiah’s description of our hearts. He said that were also desperately wicked.

Not slightly so, but desperately. That is to say that your heart and mine are dangerously wicked.

The second and probably most obvious point that I’d like you to take home with you today is, to what end should be preparing our hearts.

Or, in a word, why? We find the scriptural answer only after learning that Ezra had prepared his heart. We learn that he prepared it, “to seek the law of the Lord, and to do it, and to teach in Israel statutes and judgments.”

No, most likely, he prepared his heart to study. It could have involved reading other authors or singing hymns of praise or recognizing the beauty of God’s creation. But, it was a purposeful act of preparation that took place prior to the act of seeking. He prepared before he sought.

None of this, the reading, the studying, the walking happens by accident.

My tenth grade biology teacher had a favorite saying that we heard almost daily. Over twenty years later, I can still hear him saying it. “He who fails to prepare, prepares to fail.”

How true is that?

At every step, preparation exists.

The third and final thing that I’d like you to take away from this verse and from the message today is when we must prepare our hearts.

That depends. How often do you plan on attempting something for the Lord? Again, the Bible calls Ezra a ready scribe. Paul told Timothy that he should be “instant in season and out of season.” These men were in a state of constant service, so their preparation must have been almost constant also. The least we could say is that their preparation was consistent.

I wouldn’t recommend it, but I suppose it is possible.

If you plan on hearing from the Lord from His Holy Word, you might want to prepare your heart. Ultimately it is up to you. God’s not going to make you do it. 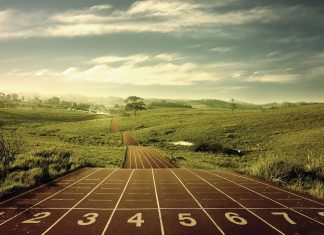 Three Things To Help You Keep Running The Race

by David McCoy The Bible says in Galatians 5:7: “Ye did run well; who did hinder you that ye should not obey the truth?”  Through the years I...

God Is Crazy About You!

Why What You Call A Revival Is Not A Revival At...