by Dr. Gerald B. Collingsworth

No one knows exactly when the “changing of the guard” occurred, but every historian and every fundamental preacher knows it happened. What guard is this? It is the guard that Christians through the years have walked around the truth. It is the guard of those who fought for the Bible, the doctrine of creationism, and the minds of children. Now, we find the “old guard” strangely missing and a “new guard” has been set. The new guard is seemingly more diligent than the old guard. The difference is that the new guard is watching to make sure that creationism, prayer, and the Bible are not allowed to take center stage as they once did.

It Had Happened Before.

“The kings of the earth, and all the inhabitants of the world, would not have believed that the

adversary and the enemy should have entered into the gates of Jerusalem. For the sins of her

prophets, and the iniquities of her priests, that have shed the blood of the just in the midst of her,” – Lamentations 4:12-13

“And I brought you into a plentiful country,… but when ye entered, ye defiled my land,

and made mine heritage an abomination.” – Jeremiah 2:7

These verses speak of the nation of Israel and the great city of kings, Jerusalem. The leaders of the world could not believe how this great nation had fallen so low. They had seen her in her heights, and now she was in her depths. These leaders were astonished. What had occurred was that a generation of apathetic preachers and an apathetic people had fallen asleep on guard duty and were replaced by a new shift of guards. The results are revealed in Lamentations 5:16, “The crown is fallen from our head: woe unto us, that we have sinned!”

The nation of Israel lost her crown. That crown stood for power, authority, and uniqueness. Now, all that she once had was gone. Israel had become a nation without glory and without respectability.

The sins that the people committed which brought down this nation are made clear in II Chronicles 36:13-21:

The results for this behavior are listed in Isaiah 3:1-26:

Some may say, “But is this not a good thing?” The answer is that it is anti-Bible and anti-God! These behaviors revealed that God had departed from the nation.

It Has Happened Again.

America, just as Canaan, was a land filled with wildlife and savages. God gave His people a land flowing with milk and honey. He gave America power and world respect. He raised up great leaders and heroes for His people, such as:

Those listed are a few among many great leaders in American history. Up until the 1960’s America was filled with real heroes.

These tactics were a satanic ploy to remove God from every part of America.

The Resulting Tragedy of Removing God Was Abortion.

“This know also, that in the last days… men shall be lovers of their own selves,… blasphemers,… unthankful, unholy,… Without natural affection,… despisers of those that are good,… lovers of pleasures more than lovers of God;” – II Timothy 3:1-4 (See also II Timothy 3:5-7)

There is a story told of a doctor who asked another doctor about certain patients he had. He asked, “I want your opinion, doctor, on the termination of a pregnancy. The father is syphilitic; the mother has tuberculosis. Of the four children already in the family, the first was born blind, the second died, the third is deaf and dumb, and the fourth has tuberculosis. What would you do about giving birth to the fifth child?”

“I would advise the couple that they should get an abortion, and I would terminate the pregnancy,” replied the second doctor.

“Then,” said the first doctor, “You just aborted Beethoven.”

What can American Christians do to save our country? We must be as committed in defense of morality as our opponents are in destroying our morals! 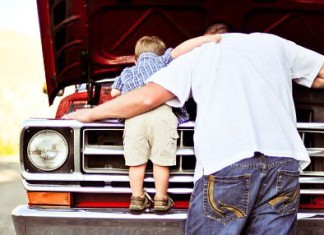 Recently I was sent a link to a YouTube video in which a father was going to teach his son the importance of work. The video certainly catches your attention, as Dad is sitting on a large zero-turn lawnmower about to drive over a large pile of video games, while his son (who looks to be in his late teens or twenties) yells in frustration.