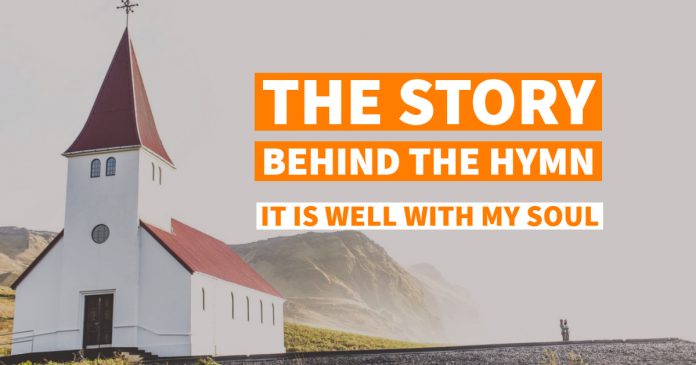 Horatio G. Spafford had been a successful attorney in Chicago. He was the father of four daughters, an active member of the Presbyte­rian Church, and a loyal friend and supporter of D. L. Moody.

When Mr. Moody and his music associate, Ira Sankey, left for Great Britain for an evangelistic campaign, Spafford decided to lift the spirits of his family by taking them on a vacation to Europe. He also planned to assist in the Moody‑Sankey meetings there.

In November 1873, Spafford was detained by urgent business, but he sent his wife and four daughters as scheduled on the S.S. Ville du Harve, planning to join them soon.

Halfway across the Atlantic, the ship was struck by an English vessel and sank in 12 minutes. All four of the Spafford claughters‑-Tanetta, Maggie, Annie and Bessie-‑were among the 226 who drowned.

Mrs. Spafford was among the few who were miraculously saved.

Later, Horatio Spafford stood hour after hour on the deck of the ship carrying him to rejoin his sorrowing wife in Cardiff, Wales. When the ship passed the approximate place where his precious daughters had drowned, Spafford received sustaining comfort from God that enabled him to write the words of this hymn: ‘When sorrows like sea billows roll … It is well with my soul.”

Why We Need To Stop Asking God To Bless America