Religion and Freedom Lost in Indiana: Christian, Stop Crying About It And Don’t Let It Happen Again! 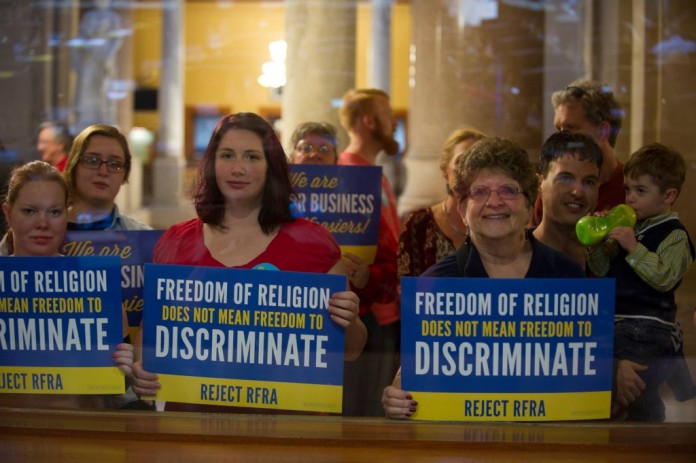 When warriors start to become victorious there is a ripple affect throughout their ranks. Winning inspires others. This happens not only on the military battlefield but in the political one as well. I think we’ve recently witnessed this scenario in our city. Though I do not claim to understand all the elements of the Religious Freedom Restoration Act that was passed by our Indiana legislature and signed by our governor just over a week ago, I do know that the opponents of this bill fiercely fought against it. Their strategy involved misinformation and wrong characterizations of the bill that they claim was designed to permit discrimination against those whose lifestyles clearly violate biblical morality.

Though this was not necessarily the case, the battle was on and the opposition was brutal. On the side of “tolerance” a plethora of people pounded the “intolerant.” The battle cry was carried by every statewide media outlet and repeated in the national news. Others came gunning too. The leaders of commerce, the educational elites, the sports gurus and even the leaders of liberal religious denominations joined the raucous fray.

But the war is not over!

Christianity and those who believe in biblical morality will no doubt continue to find themselves on the wrong side of what’s popular. We will continue to be marginalized and mocked. But we need not be beaten. Let us ever keep in mind that when Christianity was brand new, it was not popular nor welcomed by anyone. Time and time again we read of the apostles arrest and imprisonment. Sometimes they were released other times they were martyred. But they were never defeated. We hear Peter loudly proclaim “We must obey God rather than men.” (Acts 5:29). In that same context we read of those that though flogged by the religious and political leaders “went on their way rejoicing that they were considered worthy to suffer shame for His name.” (Acts 5:41). Every day these Christian soldiers kept right on teaching and preaching Jesus. (Acts 5:42). The fact that today there are millions of Christians around the globe proves that we have not been silenced and will not be overcome.

During these trying times, let us be emboldened. Emboldened to proclaim God’s saving grace. Emboldened to stand for what’s right no matter the economic, political or social consequences. Emboldened that though battles are lost our Lord, and His followers, will never be defeated.

3 Signs That You Are A Lifestyle Complainer