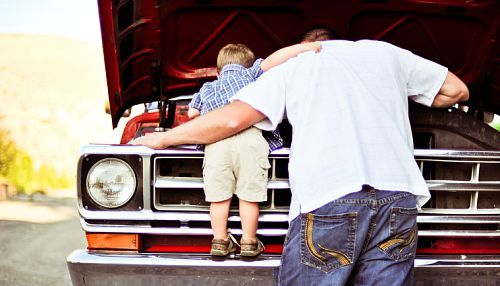 Proverbs 10:1 A wise son maketh a glad father: but a foolish son is the heaviness of his mother.
Proverbs 17:25 A foolish son is a grief to his father, and bitterness to her that bare him.

Recently I was sent a link to a YouTube video in which a father was going to teach his son the importance of work. The video certainly catches your attention, as Dad is sitting on a large zero-turn lawnmower about to drive over a large pile of video games, while his son (who looks to be in his late teens or twenties) yells in frustration.

It doesn’t take much imagination to figure out what is going on – the millennial-aged son would rather play video games and live in his parent’s house than go out and get a job and support himself, and so his dad is going to go “nuclear” and totally destroy the video game collection in order to change his son’s character. And of course, someone has to video record it and post it for the whole world to see.

Of course, this video is not unique. Other videos have shown fed-up parents destroying computers, iPods, cell phones, etc – all to publicly “teach their kids a lesson.” People do love their drama.

What would be interesting is a viral video showing that these sorts of tactics ACTUALLY WORK.

Now, I have to admit that my reaction to these videos is a little different than the responses I have seen from those my age and older. When I watch these videos, my response is this: “Where were you when this kid was 4 years old? Why did you wait until he was 20 to try to teach him a work ethic? When did you allow video games to start dominating his life? Why won’t he listen to you?”

Of course, there are many possible answers to these questions, so let’s just deal in generalities for the purpose of this post. We as parents are told to train up  A CHILD in the way he should go. It is up to us as parents to give our CHILDREN the training they need when they are CHILDREN. We are foolish to let them grow up however they want to and then try to change them when they are “old.”

Proverbs 22:6 Train up a child in the way he should go: and when he is old, he will not depart from it.

When should we teach our children to work? As soon as they can do chores.

I was amazed when a father said that his college-aged son “didn’t like to mow the grass.” Who likes to mow the grass? What does that have to do with anything? Who likes to do dishes? (By the way, everyone in my house does dishes, including my son and myself). Who likes to clean, to take out the trash, to make the bed, to wash the car, to run the errands, to clean the bathroom? Character is not about doing what we like – it is about doing what needs to be done.

At an early age, children should be taught to earn money and save it, and buy themselves things that they want. Too many are lifelong dependents – they buy what they want and beg for what they need, expecting relatives, churches and the tax-payer to provide.

Of course, some kids simply refuse to follow the values their parents have tried to teach them; but far too often, parents have neglected their God-given responsibilities and then want to complain about the consequences.

I am just being honest – if my son wouldn’t work, I would not post a video of myself lawn-mowing his video games, shooting his computer, or blowing up his iPod. I would just be embarrassed that I had not done a better job as a father.

Proverbs 10:5 He that gathereth in summer is a wise son: but he that sleepeth in harvest is a son that causeth shame.

Parents, we have 18 years or so to raise our kids. The first 4 are crucial; the first 10 are vital; the first 12 are really important; and then, when they are teenagers and young adults, we will start reaping what we have sown.

Original article can be found at http://broraz.com/2015/01/05/parents-quit-embarrassing-yourselves/

A Patch or a Fix?

6 Visions Christians Should Have In Their Daily Walk