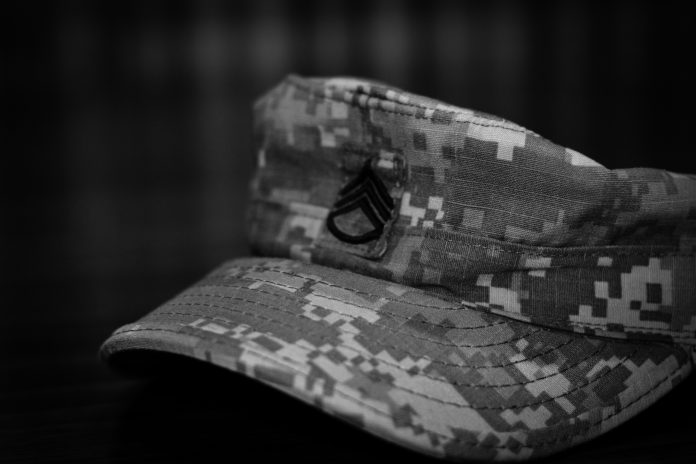 As I sat down today for a cup of tea and a moment of peace, I decided to forgo reading my Bible and instead write out some thoughts that have occurred to me recently. It’s been almost a year now since I heard the good news of the Gospel and asked Jesus to take over my life. I am fully thankful for his sacrifice and forgiveness and wouldn’t change my decision for anything. But, that doesn’t mean that life has been easy-peasy since accepting Christ as my savior.

In fact, quite the opposite is true and although things have been tough, I have personally decided to trust in God and walk through my trials as he sees fit, all while finding joy and thankfulness in the blessings he has bestowed upon me. For a new Christian, this is quite a challenge, but my military training has actually prepared me for this in ways that I never knew it could. I look back now and believe that God knew I would need that training and he led me to the military for that very reason.

The day that I signed up for the Army National Guard, I was so excited! I was 17 years old, 9/11 had occurred only weeks earlier, and I was all set to take the world by storm! I couldn’t wait to tell people that I had joined and although some (mostly those who were veterans themselves) were proud, even more were confused and even downright angered by my decision. I didn’t care though, I was ready for an adventure!

Arriving at BCT (that’s basic combat training for you civilian folks) was a shock! Seeing all the drill sergeants running around, and the soldiers lined up in perfectly neat squads was so cool! I thought their uniforms were cute (yep…I said “cute”) and when they ran by in whole platoons it was as if they never felt pain or exhaustion. I wanted to be one of those soldiers! I couldn’t wait to get in there and get started! Until I did.

Basic training, in South Carolina, in the middle of August is not an event for the faint at heart. It was hot, humid, and the perfect breeding ground for fire ants and cranky drill sergeants. For the first few weeks I actually preferred the occasional fire ant attack to the constant discipline thrown at us from the drill sergeants. The yelling, lack of sleep, muscle fatigue, memorization, bad food, smells, dirt, confusion, blood, sweat, and tears were enough to send many new recruits back to where they came from either due to injuries, mental breakdown, or unfortunate suicide attempts. After a few weeks I had definitely gotten to a point where I just wanted out. I wanted air conditioning, a hug from a loved one, my soft bed at home, and to wear some normal clothes. I was miserable and had lost all confidence that I could make it through. I had hit my bottom.

Then, a funny thing happened. I can’t say exactly when, but one day everything just turned around for me. Suddenly I realized how fortunate I was! All I had to do was listen to what I was told and obey in the simplest terms. Just listen to and obey the drill sergeants who were the experts in their field and who had my best interest in mind. Just listen and obey and all of my basic needs would be met and I would learn and grow stronger in my military training. What a novel idea! And once I started doing just that, listening and obeying without complaining and resisting, I found a great sense of excitement and joy in the tasks given to me. There’s nothing quite like getting yelled at for smiling while you’re low crawling through thick, smelly mud, but I couldn’t help myself. Once I realized how, I actually began enjoying the difficulty!

I cried when I graduated. Not because I was proud of myself, or because I was glad it was over. I cried because the life that seemed impossible in the beginning was one that I grew to love by the end. I no longer longed for the “freedom” of the civilian world. All I wanted was the simplistic life that had been provided to me by Uncle Sam.

Fast forward about 17 years. The day that I prayed to Jesus and asked him into my heart was an exciting one! I couldn’t wait to tell people, but when I did I received those same mixed reactions. Other saved people were so happy they cried. Those that weren’t saved either didn’t know what to say, or they actually became angry.

As I began reading my Bible more and attending church regularly, I was looking forward to being like the joyful, modest, kind women that I met at church. They were just so sweet to be around and it seemed like their lives all roses and sunshine. I had never met women like them in the secular world so I figured that it must be due to Jesus, and I jumped right in!

Much like the early days of basic training, I quickly realized that a life lived for Jesus wasn’t at all what it looked like from the outside. It’s hard. There’s an endless amount of learning to be done, changes to be made in our worldly lives, and trials and tribulations abound. In my first year as a saved person, I dealt with more anxiety, loss, and difficulties than I ever had before in my adult life. It has been a tough year and walking through it has tested my faith numerous times. But, then one day a funny thing happened.

Just like that momentous day in basic training, I realized that in my walk with Jesus, all I have to do is just two simple things. Listen and obey. Read my Bible, attend church, and obey the teachings of God and He will take care of me. I realized that although this year’s trials seemed vast, my blessings are far more numerous and although God walked me through some difficult times, he was there beside me to make sure I made it through as long as I listened and obeyed. Realizing this was so freeing! Now, understanding this lesson, I can feel true joy! I can let go of the anxiety and actually smile through the storm, just like I smiled as I did a low crawl through the mud in basic training.

God knew that I had a lesson to learn, and as a new Christian there’s no way I could grow and be joyful without His teaching. It has taken me an entire year, but I finally got the message. Joy is not found in a life of ease. It’s found in a life of simplicity. Simply listen. Simply obey. And now, even knowing the difficulties that I may face as a Christian, I have no desire to turn back. I no longer desire the “freedom” of the secular world. All I want and all I need is the simple life provided to me by God.

A Christian, wife, mother of one beautiful baby girl, former military logistician, and registered nurse from a tiny town in Southern Pennsylvania.

Why Does God Want Us to pray?

7 Reasons To Develop Your Writing Skills

Hope in The Gospel