The Lord’s Great Commission to us is both local and worldwide:

Acts 1:8 But ye shall receive power, after that the Holy Ghost is come upon you: and ye shall be witnesses unto me both in Jerusalem, and in all Judaea, and in Samaria, and unto the uttermost part of the earth.

The Lord left us a mission to go into all the world – our Jerusalem (our own city, the streets in your neighborhoods), our Judea (our region, just beyond the “drive in” reach of our church), our Samaria (into more distant regions), and unto the uttermost parts of the earth (what we consider “foreign missions”). We are not called to one or the other. We are to be witnesses BOTH in Jerusalem, Judea, Samaria and the uttermost parts. We can go and we can send, but we are called to BOTH.

There’s a lot of talk about church planting these days. It’s time that we figured out the best way to put our money where our mouths are.

These days, starting a new church from scratch is expensive any way you cut it. The old days of starting in a brush arbor have been replaced by starting in a storefront or school that costs a couple of grand a month (one church planter I knew in California had a monthly rental fee of $7000). The days of starting a church from scratch with new converts (not a split from an established church) and becoming self-sufficient in a few months seem long gone, if they ever existed. I am sure that there are some men out there that have seen such immediate success; I just don’t know any personally. The church planters I know have struggled for several years to reach a point where the church can support them full time at a reasonable living wage and pay their own bills. Unfortunately, some have gone deep into personal debt in the process.

It is just as scriptural for a church planter to raise support as it is for a missionary to a foreign field. The church planter does not need support for a lifetime but he does need enough to get the church started and established. One year is probably not going to do it. He also needs up front money to get to the field, to buy necessary supplies, and to rent a place to get started. Yes, I know that the church planter can get a job, and many do. I suppose the question is, “How serious are we, as established churches and pastors, about seeing new churches started?” We all know that a church that is started by a full-time preacher who can dedicate all that he has to the work is more likely to see the church established than the man who has to do it in his off hours.

As someone has well said, great churches aren’t built on spare time and pocket change.

Perhaps if young preachers coming out of college knew that they would be supported and helped by the churches, more would be willing to risk starting new churches.

Allow me to make a few suggestions as someone who is NOT an expert but has at least been on both sides of the equation:

1. THE SENDING CHURCH SHOULD BE WILLING TO BEAR A LION’S PORTION OF THE COST.

Right now, our church is preparing to start a new church in 2015. Already, we are making plans to raise and save money for the beginning of this work. Two years out, we are working towards meeting many of the financial needs of this new work. Of course, this may cause us to postpone putting a coffee shop in our foyer; or, for that matter, putting in a foyer. If churches want to give birth to churches, they need to be willing to sacrifice some things to see it happen. We are going to have to see beyond the four walls of our own ministry.

One church planter told me that most of the churches in his area would not support him because he was “too close.” It wasn’t like he was just down the street or across town – he was not even in the same town. I had the same reaction from some when we came to the Wylie area. Thirty minutes away? Too close. Really? It makes me wonder if we are concerned about God’s work in a region or just in our own church. Personally, I am MOST interested in church plants in my own region. The Dallas area is in desperate need of new independent, fundamental, King James Bible preaching, soul-winning, right-living, missions-minded Baptist churches. There are 4 million people here – more than enough work for all of us to do.

I believe in having church planters into the church just like missionaries. It is good for our folks to see men who want to start churches in America. We meet them and vote on them just like our foreign missionaries. We begin to support them on a monthly basis. Over the years, we have always had some church planters in the missions family. We have supported some for up to five years in difficult areas. I wish that we could support every good church planter that we meet.

4. RAISE A SPECIAL OFFERING FOR A CHURCH PLANTER BEFORE HE STARTS.

The upfront costs of starting a new church are daunting. I suggest to church planters that they spend at least a year saving up every love offering and bit of support. Perhaps the home church or a local church or a church somehow connected to a church planter could take up a special offering towards the new plant.

Every year, our church takes up a “Birthday Present for Jesus” love offering at Christmas time. We have often given it entirely to missionaries, or used it for a designated item at the church (announced ahead of time). Last year, we announced that it was going to a new church plant an hour south of us. Our folks outdid themselves and raised almost $2500, which went to this church planter a few months before he held his first services.

5. SEND A SPECIAL OFFERING TO A CHURCH PLANTER AT CHRISTMAS.

For several years, someone sent us an anonymous card every year at Christmas time with three crisp $100 bills. I can’t tell you what an encouragement and help that this offering was to us. Sometimes, church planters feel cut off and alone. They are not thought of. Little things like this go a long way.

As I wrote recently, new churches are a long-term help to the cause of missions.

Of course, nothing I wrote today was meant to diminish the importance of foreign missions in the least. Another post could be written on that, but it would be better written by someone who has served on the foreign field. Needless to say, we are all in this together – but I believe that if we fail to see new churches started, our missionaries will suffer the most in the long run. 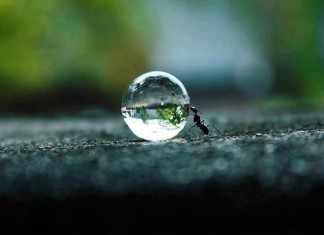 Do You Work Harder For God Or Your Life?

We live in a hurried world. We get up early, run long hours, fill our days to the fullest, and have to fight and plan to have any leisure. Right or wrong, this is how most of us live.