A Christian Response To Those Who Say They Want More Than “Thoughts and Prayers” After School Shootings. 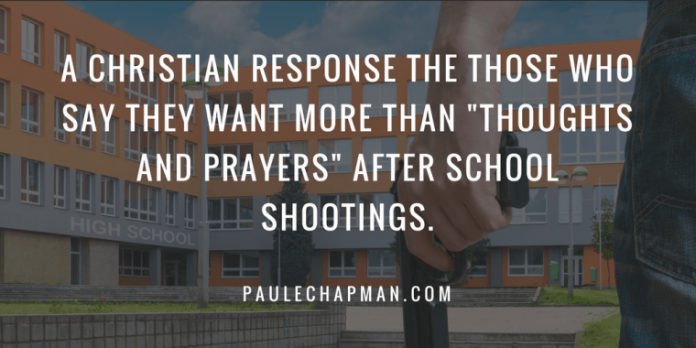 Matthew 23:37
“O Jerusalem, Jerusalem, thou that killest the prophets, and stonest them which are sent unto thee, how often would I have gathered thy children together, even as a hen gathereth her chickens under her wings, and ye would not!”

It seems that an increasing number of politicians and public figures say they are tired of hearing that “our thoughts and prayers” are with the families of school shootings. They say that more needs to be done. I agree.

Prayer is part of the solution. I believe in the power prayer. It moves the hand of God in the world and the heart of those who pray. We will continue to pray for the families affected by these tragedies. It is our right and privilege to do so. However, the same people that say they’re tired of our thoughts and prayers are usually the same people that are keeping Christians from doing more to help.

It is well-documented that the secular coup of the public school system has been disastrous. Public schools began in church buildings. The first school books were filled with Christian concepts and Bible verses. There has been a concerted effort to remove God from the classroom and public arena. In 1963 the Supreme Court established a prohibition on “state-sponsored prayer” in US schools. That decision has been the foundation of the continued effort to remove any positive influence of Jehovah and His Son in schools. The school system has been in decline since they kicked out the Bible and prayer. The US school system is now a mission field.

Some of you are jumping out of your seat right now citing the Establishment Clause. Sit back down. A nonsensical and unhistorical interpretation of the First Amendment of the Constitution has become the weapon of choice among the enemies of God to remove His influence from our government. Study genuine US history. This amendment was not added to protect the government from churches, but to protect the churches from the government. Christianity was not only allowed in American government; it was clearly preferred over other religions for much of our history. You don’t hear that very often do you?

Here are three things we could do to stop the madness of school shootings if enemies of God would get out of our way.

We would tell children God loves them, but you insist on teaching them that there is no God.

God cares more for these children than we can conceive. He wants them to be protected. Yet, He has been evicted from public property by the powers that be.  He is told to stay out and then He is blamed when bad things happen.  You can’t have it both ways.

Never underestimate the power of feeling loved and accepted. Most people that commit horrendous crimes are deeply troubled. Often, this trouble begins with a lack of support and nurture. They feel separate from society and unaccepted by the ones they torment.

We would inform children they are a special creation of God, but you insist on teaching them they are animals who are the result of cosmic accidents.

The evolutionary view taught in schools is dangerous. History is replete with evils perpetrated by true believers in evolution.

Evolution is more than a scientific theory. It is a philosophical system of life and a religious system of belief. It affects an adherent’s entire worldview. The result is that children are taught that they are merely a highly evolved animal. Not much different than any beast of the wild but for the ability to reason. Human life becomes cheap. There is nothing in life bigger than them. There is nothing after death. They are unwilling participants in an unfeeling and meaningless universe.

What a terrible way to live! How hopeless people can become! And how ruthless…

We would teach children godly morality that would change how they see the world and treat their neighbor, but you insist that morality is conditional, ethics are situational, and the Bible is judgmental.

The knowledge of a holy God Who has told us what is right and wrong is invaluable. The awareness of inevitable personal judgment from this Almighty God is powerful. The Bible gives us foundational expectations for mankind in the 10 Commandments.

By removing God from the equation, they have unanchored society from the natural moral laws that provide security and peace.

Today, children are taught that they are the result of cosmic mutations and accidents. Life has no meaning outside of pleasure and power. The godless mantra of “Eat, drink and be happy for tomorrow we die,” is the norm.

It doesn’t have to be this way! Change is available. God is ready to help. Even now He desires to bring the children under His wings of protection and provision if you will allow Him.

There is no argument for clear-minded people. Our culture and country have devolved morally since removing God from the public consciousness.

There have always been guns available in the US. Only in recent decades do we discuss the need to remove guns or add police and metal detectors to schools. Great job to those of you who wanted God removed from society. You have succeeded in making schools a “God-free zone.” Tragedy, pain, and unrest is your reward.

You can continue your feeble efforts to legislate peace and happiness while ridiculing those who are ready, willing, and able to help. Or you could get out of our way and let us offer the peace and fulfillment that only Jesus Christ can bring.

Original article can be found at http://paulechapman.com/2018/02/20/a-christian-response-to-those-who-say-they-want-more-than-thoughts-and-prayers-after-school-shootings/

The Importance Of The Church

5 Things To Do Instead Of Complain!

How To Raise A Brat

Is Your Church Compromising For The Sake Of Growth?