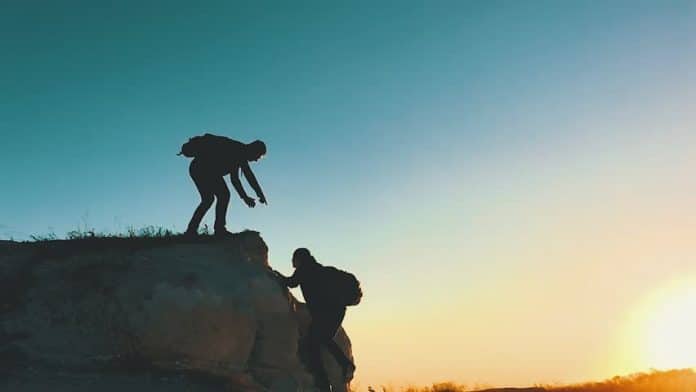 Jude 1:22 – “And of some have compassion, making a difference: And others save with fear, pulling them out of the fire; hating even the garment spotted by the flesh.”

Compassion is the missing key that will unlock the door to the stony hearts of the lost and the backslidden.

As President Theodore Roosevelt once said, “People don’t care how much you know until they know how much you care.” We could be the very ones that make the difference in whether or not someone will trust Christ and spend eternity in Heaven, or whether that person will reject Him and face eternity in Hell. Additionally, we could encourage someone to determine to live his life for Christ, or we could create a “bad taste in his mouth” toward the things of God by our lukewarm or cold Christianity.

At an early age, I began attending a “church” which more closely resembled a social club or a concert than a house of God. Sadly, I do not ever remember hearing actual Bible taught in this type of church. Even though I was going to church on a regular basis, I was lost and on my way to Hell, not having any Bible foundation.

When I was just eleven years old, my mother was diagnosed with cancer and passed away. Through a series of events, I moved in with my aunt and uncle by the time I had turned thirteen. I began attending a Bible-preaching, independent fundamental Baptist church with my relatives. At first, I was NOT happy! I had become comfortable hearing that I could do whatever I wanted, for “God accepts you just as you are.” At these previous churches, I was not used to hearing some strange preacher stand up and confront me with my sins. I was forced not only to see my sins but also to accept that these “accusations” were valid because the preacher had Bible to back it up! For a long time, I shut out the preaching and resented the ones who tried to teach and reach me through the Word of God.

The Bible slowly but surely began to soften my heart and take root. The pivotal tools that made the greatest difference in aiding in this endeavor were the people who took the time to cultivate the stony ground of my heart in which those Gospel seeds were planted. Over time, those compassionate Christians showed how much they cared, not only in word but also through action.

Not searching for personal gain or applause, they merely and sincerely wanted to see another life brought to Christ and transformed by the Word of God.

One of the first compassionate Christians to break through my defenses during this time was my youth director. When I was nothing but rude and rebellious, he pulled me aside to correct me for my bad behavior. He followed this correction with the assurance that he had my best interest at heart. With tears in his eyes, he told me that he was willing to become my enemy because he believed in me. He said he would even fight me “for me” if necessary. As a child who had suffered tragedy, loss, and bitterness, I really believed for the first time in many years that someone cared about me. Shortly after this confrontation, I trusted Christ as my personal Saviour at my church’s summer teen camp. As the months ticked by, I began to truly desire to know more about the Bible and to strive to apply its principles in my life. I had so many questions, and not everything made sense. However, with my newborn faith growing steadily, I wanted to dedicate my life to Christ. Compassion paired with the Word of God is what made the difference and changed my life forever!

Whether we are reaching the unsaved or helping the baby Christian to grow, we must beware of these selfish dangers if we wish to be effective in reaching others:

Galatians 4:16 – “Am I therefore become your enemy, because I tell you the truth?”

Colossians 4:4-6 – “That I may make it manifest, as I ought to speak. Walk in wisdom toward them that are without, redeeming the time. Let your speech be always with grace, seasoned with salt, that ye may know how ye ought to answer every man.”

An attitude creeping into churches and harming believers is that of the “contemporary movement.” Seeping into our pews is the teaching that it is “okay” to live however we want throughout the week, as long as we look like Christians on Sunday. Though it is woeful, this attitude says, “I won’t tell if you won’t.”

Sadly, we who know the truth casually sit by and watch our friends, Christian neighbors, and those we could be helping slide down a slippery and dangerous slope leading to ruined lives and broken potential. (Proverbs 14:12) Those leaning toward error will never be reached if we are not willing to stand up! Our silence to these hidden sins is just as bad as participating in the act itself.

Partaking in the sins of the people we are trying to reach in order to “relate to them” will only bring harm both to us and to others. The lost and the baby Christian need someone who is willing to teach them the truth! Mostly, they need someone to fight them “for them,” not someone to be another worldly buddy. When we who are in a position of authority or leadership have an opportunity to teach or to instruct, but keep silent, we inadvertently aid in the downfall of struggling Christians. This inaction of not reaching out also has its effect on the lost as it allows them to continue down their destructive pathway.

I am still so grateful that there were Christians willing to correct me when I was headed down the wrong path, regardless of whether I knew it or not. Because they were not afraid to speak up, I cannot claim ignorance; I owe a debt to them to do right.

Galatians 6:1-4 – “Brethren, if a man be overtaken in a fault, ye which are spiritual, restore such an one in the spirit of meekness; considering thyself, lest thou also be tempted. Bear ye one another’s burdens, and so fulfil the law of Christ. For if a man think himself to be something, when he is nothing, he deceiveth himself. But let every man prove his own work, and then shall he have rejoicing in himself alone, and not in another.”

Where were we in life before we got saved and knew all of the Bible that we now know? We cannot expect new Christians or the unsaved to act as those who have grown up in church. We must grant them patience and grace as they are taught the Bible and as they learn to develop convictions of their own. Consider this—how long did it take for us to give up certain sins that we maybe even grew up knowing were wrong?

Sometimes, we hate sin so much because it is personal to us or is something out of which we were saved. We need to be careful not to turn that dislike of the sin into a dislike of the person committing the sin. That person caught in sin needs someone to show them the Bible way, just as we did. Being so far removed from our past sins can cause us to look down on those who struggle with the same sins that we once did. My pastor says all the time, “The church is like a hospital. It’s where people go to get well.” Just as sick people go to the hospital for healing and help, sinners go to the church for spiritual healing and help.

II Thessalonians 3:13-15 – “But ye, brethren, be not weary in well doing. And if any man obey not our word by this epistle, note that man, and have no company with him, that he may be ashamed. Yet count him not as an enemy, but admonish him as a brother.”

Our testimony in reaching others is just as crucial as the Bible we teach. If our lives do not reflect that which we teach, we are inadvertently saying that we do not believe the Bible literally and that we ourselves are not surrendered. How can we expect others to do right if we will not? We cannot have the “do as I say, not as I do” attitude. Do we have the right testimony?

It is easy to spot Christians trying to fit into the world. It is an obvious struggle for them to act as if they have it all together at church. They are the “fish out of water,” or the elephant that thinks it can fly! If we do not have compassion for those we are trying to reach and if we are unable to be the right kind of example to them, it will be impossible to make a lasting difference. Sadly, our failure may push them to further rebellion and resentment toward those who are actually trying to help them. We must live right so that we are not a stumbling block to those who are watching and following our example. (Romans 14:12-13)

What made me want to give my life in service to Christ was watching those great men and women of my own church who practiced what they preached! Not only did they show that they believed the Bible, but they also put their faith into action when the trials of life came along. Through personal sacrifice, they showed their dedication to helping me and others. It was serious to them! They made the Christian life a lifestyle; it was not just a catchy saying or something they did to make them feel good about themselves.

Whose life could we make a difference in today?

God may have allowed us to cross paths with someone that only we could reach. Will we have the compassion necessary and be surrendered enough to reach out to help, or are we willing to let someone perish so that we can live “comfortably” in our complacency? I pray that Christians will rise up and follow the example that Christ set. Remember what He did for us! Remember what others have done for us!

Can we not put aside our selfishness in order to have a small part in salvaging the lives of others? Who will go and help the ones who have nothing to offer in return? Who will have the compassion to make a difference?

Are There Biblical Principals Which Govern Church Worship Music?

5 Ways To Make Sure Your Kids Hate Church

THE PURPOSE OF THE NEW TESTAMENT LOCAL CHURCH