The Seven Saddest Sayings for Sinners: #6 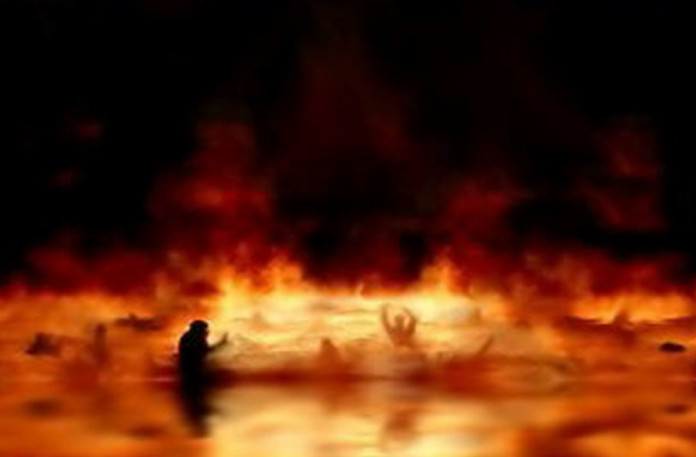 VI. Men—Made in the Image of God—Cast Into Fire Prepared for Demons!—Matt. 25:41
Another of the saddest sayings in the whole Word of God is that which fell from the mouth of the Lord Himself, in Matthew 25:41. Jesus tells of His future return to the earth when He will set up His kingdom at Jerusalem and reign from David’s throne. Then the people of the earth will be gathered before Him for judgment.

“Then shall he say also unto them on the left hand, Depart from me, ye cursed, into everlasting fire, prepared for the devil and his angels.”There are many striking things about this tragic saying of Jesus.

First, it is remarkable that it is Jesus who will send sinners to Hell. We preachers sometimes say to a sinner, “It is your own fault. You send yourself to Hell. You cannot blame Christ for it.” That is essentially true, yet we must remember that the tenderhearted Jesus Himself who died to save sinners will also be the Judge who will personally condemn every Christ-rejecting sinner and send him to the flames. This word is all the sadder because it must fall from the mouth of the Lord.

When the Lord condemns a man to Hell, who is there who can intervene? Who is there to make atonement? Who is there to be an advocate, a mediator? Once Jesus said, “Come”; now to those who would not come, He says, “Depart!”

Mother, is your accountable child unconverted? Then you must be alarmed, for that child is under a curse. You should act more quickly than you would if you knew he was stricken down with polio or leprosy. Sinners are cursed of God.

Sometimes a Christian young woman falls in love with an unsaved young man. She feels that he is essentially good, and she loves him so dearly and wishes to marry him. Don’t do it! The curse of God is on him if he is not saved.

How well Paul knew this great truth—that every lost sinner is accursed—for in I Corinthians 16:22 he says, “If any man love not the Lord Jesus Christ, let him be Anathema…”—that is, let him be accursed.

It is as if Paul said in earnest prayer to God, “Lord, if any man love not the Lord Jesus Christ, let him be damned to Hell forever.” For that is what does happen to Christ-rejecting sinners. Christ Himself will have to turn sadly to unconverted sinners and say, “Depart from me, ye cursed.”

The sadness of the verse grows deeper, for Jesus said, “Depart from me, ye cursed, into everlasting fire, prepared for the devil and his angels.”

Some ultradispensational Bible teacher would have us believe that there will be no lake of fire until after the last judgment; but here we see that the fire is already prepared. It is the same fire mentioned by the Lord when He told of the rich man who fared sumptuously every day until he died and woke up tormented in flames and Hell.

How sad that men, made in the image of God, reject Christ and will not be saved. How sad that men turn down the offers of mercy and will not go to the Father’s house of many mansions! They were told, “Whosoever will, let him take the water of life freely,” but they would not drink.

God loved the whole world—those who will never be saved as well as those who would. “He is the propitiation for our sins: and not for our’s only, but also for the sins of the whole world” (I John 2:2).

It is a tragedy unspeakable for men who were intended for Heaven to land in the pit of Hell, in the fire prepared for the Devil and his angels.

Every man and woman and child who goes to Hell will know that it was not intended for him, and that he could have escaped had he turned to Jesus for mercy and pardon.

Surely these words are among the saddest that Jesus ever spoke, “Depart from me, ye cursed, into everlasting fire, prepared for the devil and his angels.” In the same chapter, in verse 46, we are told, “And these shall go away into everlasting punishment: but the righteous into life eternal.”