The Harm Of Infant Baptism 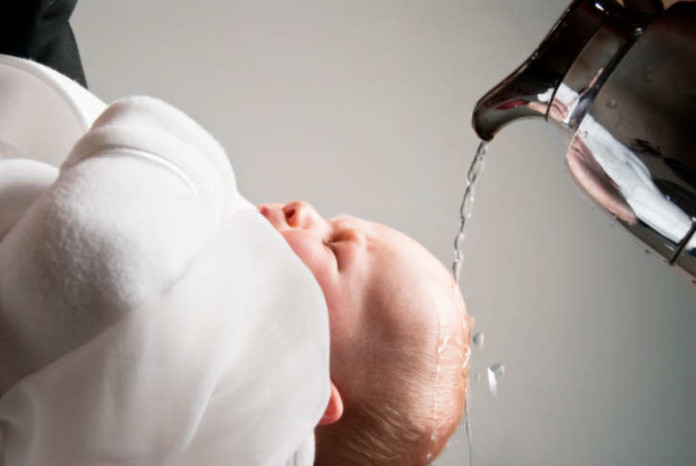 Since salvation must come, according to the Bible, before there can be Bible baptism, it is obvious that there is no reason for baptizing babies, unaccountable infants. There is not one New Testament record of the baptism of an infant. Jesus did lay His hands on little children and bless them, but certainly He did not baptize them or the Scripture would somewhere have said so.

In the sixteenth chapter of Acts, there are two cases where households were baptized. The first was the household of Lydia of whom the Scripture says in Acts 16:14,15:

“And a certain woman named Lydia, a seller of purple, of the city of Thyatira, which worshipped God, heard us: whose heart the Lord opened, that she attended unto the things which were spoken of Paul. And when she was baptized, and her household, she besought us, saying, If ye have judged me to be faithful to the Lord, come into my house, and abide there. And she constrained us.”

We do not know who was included in her household. Nothing was said about children, and it is not even intimated that she was married. Certainly there is no teaching of “infant baptism” here. In the case of the jailer, in the same chapter, the Scripture makes it certain that there were no unaccountable babies. That passage in verses 29 to 34 says:

“Then he called for a light, and sprang in, and came trembling, and fell down before Paul and Silas, And brought them out, and said, Sirs, what must I do to be saved? And they said, Believe on the Lord Jesus Christ, and thou shalt be saved, and thy house, And they spake unto him the word of the Lord, and to all that were in his house. And he took them the same hour of the night, and washed their stripes; and was baptized, he and all his, straightway. And when he had brought them into his house, he set meat before them, and rejoiced, believing in God with all his house.”

Verse 33 does say “and was baptized, he and all his, straightway.” But notice that verse 32 states that Paul and Silas preached the word “to all that were in his house” and verse 34 says that he “rejoiced, believing in God with all his house.” Certainly everybody who was baptized in that household heard the word and believed in Christ.

BABIES CIRCUMCISED, WHY NOT BABIES BAPTIZED?
It is true that boy babies were circumcised in Israel when eight days old (Gen. 17:12). But baptism and circumcision are two entirely different matters. Circumcision was for boys and men only, while baptism is for both sexes alike. Circumcision was for every boy or man of Hebrew blood, while baptism is only for saved people. Circumcision and baptism mean entirely different things. Circumcision meant that this child was an Israelite, one of the chosen race by natural birth. Baptism means that the one baptized is born again and one of God’s children by a birth from Heaven. One has no right to be baptized until he is born as God’s child. The Bible does not say one word about dedicating little children to the Lord by any kind of Christian ceremony and certainly does not mention baptism of babies anywhere in the Bible.

It is a sad and remarkable fact that many earnest Christian people have followed Roman Catholics in sprinkling unaccountable babies when there is not one verse in the Bible to even intimate that it was the will of God! In the Bible, people were baptized after they believed and were saved, as was the case with the jailer and his entire family.

THE HARM OF INFANT BAPTISM
Baptism of an unaccountable baby does untold harm. For one thing, it leaves the impression that the change of heart is not necessary. It leaves the impression that the religion of the Lord Jesus is a matter of ritual, not of personal faith. It ignores the Bible teaching that baptism represents the burial and resurrection of Jesus and the believer’s change of heart. Worst of all, the one who is thus given a ceremony which was only for Christians, often is led to believe, in after years, that since he is a member of a church, has been baptized, and is a respectable citizen, therefore he does not need the change of heart, does not need to be converted, saved by the blood of Jesus. Whatever fine argument you may make for the sprinkling of a little baby, it is answered by the plain, indisputable fact that Jesus did not command it and it is certainly unscriptural and wrong.

We begin to see, then, why the Lord Jesus puts such stress on baptism. It is the gospel, so simple that every new convert can preach it. It pictures the plan of salvation. Yea, it safeguards the plan of salvation. If I change the form of baptism, I change the meaning of baptism, I change the doctrine of salvation. If I take a little child, unaccountable, who has not trusted in Christ for salvation, and without his volition, I put water upon his head and “baptize” him, I have taught an entirely different plan of salvation. I have said to the unthinking world that people do not need a change of heart, but that with a simple rite of dedication they have a right into the fellowship of a New Testament church. When I change the form of baptism, I have lost all the picture about the death of Christ, His atonement, His resurrection, the change necessary in the believer’s heart and the change commanded in his life. When people go wrong on baptism, they go wrong on the doctrine of salvation. If people have a right to change the form of baptism, they have a right to change the form of church government, change from the New Testament program of soul winning to the modern program of education. Good, old time Methodist people who believe, as John Wesley did, in a change of heart, oftentimes wonder why that strong tendency of modern Methodism toward teaching salvation by works, by character, by education and by culture instead of salvation by the blood! One reason is, they do not have Bible baptism, a burial of the believer with Christ, to picture to the world the great teaching of the plan of salvation. Sprinkling babies teaches against the need for a change of heart.

STAY WITH BIBLE BAPTISM
Suppose we even retain the form of baptism, but still teach it as essential to salvation as do our Catholic friends and as do Churches of Christ or Disciples, Lutherans and others. When one is baptized, then, he says to the world. “I am saving my soul by my good works.” The preacher or priest is saying, perhaps unconsciously, to the world, “The church by rites and ceremonies is saving this man’s soul.” The candidate baptized, the preacher or priest, and the onlookers alike all miss the blessed, blessed teaching that Christ died for our sins, that men are saved simply by faith in His shed blood, that a deep-seated, fundamental change has been made in the heart of the believer, called the new birth. BIBLE BAPTISM IS GOD’S SAFEGUARD AROUND SOUND DOCTRINE ON THE PLAN OF SALVATION. That is the reason if baptism was not done the right way, or if it was done with the right method, but without the scriptural teaching in the minds of the people, it should be done again, as Paul baptized the second time those converts at Ephesus as told in Acts 19:1-6. Let us stay with the Bible as to the form and meaning of baptism and baptize only those who have a Bible right to baptism, that is, saved people. Certainly baptism of babies is unscriptural, dangerous and wrong.

The Middle East Turmoil And The Bible