Hey Pastor! Get A Backbone and Stop Compromising! 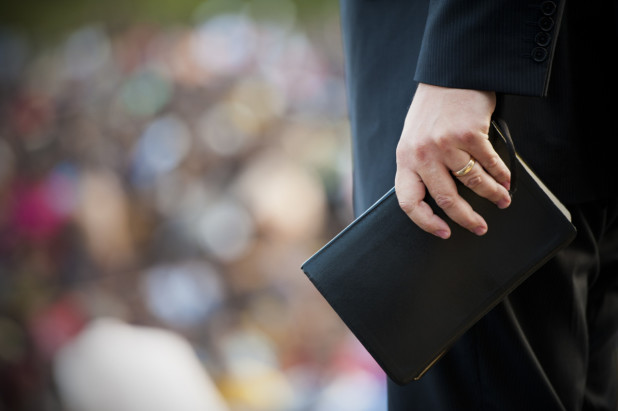 by Johnny The Baptist

Is there not here a prophet of the Lord besides, that we might enquire of him (1 Kings 22:7).

Men who speak for God never merge into the fog around them. Noah stood alone in a civilization of culture and progress. His contemporaries must have laughed at him as an eccentric who was building an oversized houseboat and looking for the world to end.

Elijah stood alone among the priests of Baal and the stooges who ate at Jezebel’s table. When he challenged the multitude, that fifth-amendment crowd “answered not a word.” Amos stood alone in the religio-political system of his day. Dr. Kyle Yates wrote, “His time had not been spent in a divinity school. He was unwilling to be classed as a member of the guilds who made their living by bowing to the wishes of the people and preaching a pleasing message that would guarantee a return engagement.”

Jeremiah stood alone among the tranquilizers of his day who were preaching peace when there was no peace; but we are still reading Jeremiah while the happiness boys of his day have been forgotten.

Daniel spoke for God in the midst of a pagan empire and it was worth a night in a lion’s den to be able to read God’s handwriting on the wall.

Paul conferred not with flesh and blood but got his orders direct from Headquarters. He was not the product of any assembly line. Dr. Mordecai Ham said, “Paul was a strategist who thought out his strategy on the field of war, not in some Jerusalem war office where parchment and sealing wax were more plentiful than experience and foresight.”

True prophets are solitary people; eagles do not fly in flocks. It is not easy to be a Lone Dissenter. When the messenger was sent for Micaiah, he must have said in effect, “The clergy have agreed, and you had better make it unanimous. It is quite an honor to speak before two kings and four hundred prophets. Why are you such an odd number! This is a good gravy train and you had better ride it. This is the mood of the hour and you had better get with it.” The same subtle pressure today would persuade preachers to get in step with the times and ride the wave of the future.

What we need are more preachers out of step with the times, more odd prophets like Micaiah. We are told that we must adjust. Adjust to what! What is there in this world setup to adjust to? God’s man needs to adjust only to God’s Word and God’s will. It is not the business of the prophet to harmonize with the times. “What concord hath Christ with Belial?” (2 Corinthians 6:15).

The Lord’s preacher is a soloist; he was never meant to play the accompaniment to anything. The pulpit is not a platform from which to boost the projects of men to bring in a false millennium, the Kingdom without the King. No matter how much Scripture may be quoted or how many false prophets bid Ahab go up against Ramoth-gilead, Micaiah will stand his ground and refuse to be swept off his feet by popular movements. The greatest need of the hour is a four-hundred-and-first prophet of the Lord besides, that we may enquire of him.

There are several ways of silencing a prophet. Persecution will do it. John the Baptist’s head is not always brought in on a charger; there are newer ways of decapitating the prophet with more finesse. Promotion sometimes does it. The prophet is given a high seat in the synagogue and is never heard from again. The pressure of the times and discouragement can do it. Jeremiah wanted to quit preaching, get out in the wilderness, and run a motel. Another prophet can sometimes do it, as when the prophet at Bethel backslid in his own revival, and he who could turn down a king was deceived by another prophet.

Prophets are not popular at home; they are without honor in their own countries. They are not popular with politicians. Ahab hated Micaiah—but he feared him enough to disguise himself when he went to battle, lest Micaiah’s predictions [of his certain death] came true.

There was another prophet by the name of Obadiah who was out with Ahab looking for grass when he should have been with Elijah praying for rain. The true prophet does not know how to work both sides of the street. He refuses to dine with Jeroboam and does not let his hair down with the priests of Bethel.

Prophets are not popular with Pharisees. Our Lord asked, “Which of the prophets have not your fathers persecuted?” (Acts 7:52), and He said, “… ye are the children of them that killed the prophets” (Matthew 23:31). One generation stones prophets and the next builds sepulchers in their honor. Organized religion hates the preacher whose headquarters is heaven, whose Superintendent is God. They are enraged when they cannot control him. The times are never propitious for the Lone Dissenter.

Naturally, one can hardly expect a sermon on Micaiah to be any more popular than its subject. But it is worth preaching if in the congregation one man will hear and heed the call to be a New Testament prophet. If such a prospect is reading this, God bless you. The odds will be four hundred to one, the diet may be bread and water, and the orders are: “… what the Lord saith unto me, that will I speak.”

If you are interested in the prophetic ministry, get ready for trouble! You will be despised by Amaziah and all who want to preserve the status quo at Bethel. You will be hated by Jezebel and all who would set up the worship of Baal alongside the altar of Jehovah. You will be too angular to fit the Procrustean beds of the religious world. You will not be able to feather your nest in this world; scant provision is made for prophets down here. You will report to Heavenly Headquarters and get your orders from the Main Office. If you are a prospect, think it over. You had better mean business, else your ministry will be pathetic instead of prophetic. And remember that prophets are needed, but not wanted.

It is time for another four-hundred-and-first prophet of the Lord besides, that we might enquire of him.

The decent into apostasy

Leonard Ravenhill expressed it well when he said:

“There is a terrible vacuum in Christianity today. The missing person in our ranks is the prophet; the man with a terrible earnestness, the man totally otherworldly. The man rejected by other men, even other good men, because they consider him too austere, too severely committed, too negative and unsociable.

Let him be as plain as John the Baptist. Let him for a season be a voice crying in the wilderness of modern theology and stagnant ‘church-anity.’ Let him be as selfless as Paul the apostle. Let him, too, say and live, ‘This ONE thing I do.’

Let him reject ecclesiastical favors. Let him be self-abasing, non-self-seeking, non-self-projecting, non-self-righteous, non-self-glorying, non-self-promoting. Let him say nothing that will draw men to himself but only that which will move men to God. Let him come daily from the throne room of a holy God, the place where he has received the order of the day. Let him, under God, unstop the ears of the millions who are deaf through the clatter of shekels milked from this hour of material mesmerism. Let him cry with a voice this century has not heard because he has seen a vision no man in this century has seen. God send us this Moses to lead us from the wilderness of crass materialism, where the rattlesnakes of lust bite us and where enlightened men, totally blind spiritually, lead us to an ever-nearing Armageddon.

by Johnny The Baptist

Original article can be found at http://jtb.fundamental.org/?p=79

As A Woman, How Can You Build Up The Men In Your Life?

Have Faith In God