Hebrews 13:10-14, “We have an altar, whereof they have no right to eat which serve the tabernacle. For the bodies of those beasts, whose blood is brought into the sanctuary by the high priest for sin, are burned without the camp. Wherefore Jesus also, that He might sanctify the people with His own blood, suffered without the gate. Let us go forth therefore unto Him without the camp, bearing His reproach. For here have we no continuing city, but we seek one to come.” Deuteronomy 23:9, “When the host goeth forth against thine enemies, then keep thee from every wicked thing.” Leviticus 16:27, “And the bullock for the sin-offering, and the goat for the sin-offering, whose blood was brought in to make atonement in the holy place, shall one carry forth without the camp; and they shall burn in the fire their skins, and their flesh, and their dung.”

The Israelites could eat the flesh of many sacrifices. Such was the case of the Passover lamb. Then there was a special offering that could be eaten only by the priests. There was one, however, of which no one could eat. This was that which was offered on the day of atonement, which was the tenth day of the seventh month of the year. This offering was a special one It’s skin, flesh, hair and dung were taken outside the camp and burned. Can you imagine the odor of such a burning?

Now the offering on the day of atonement being outside the camp and the motley crowd that could not be inside the camp with the Israelites represent God’s people. When the Lord Jesus was crucified outside the walls of the city of Jerusalem, He went outside the camp to identify Himself with sinners, and now He calls us outside the camp to Himself Hebrews 13:13, “Let us go forth therefore unto Him without the camp, bearing His reproach.” Can you imagine how obnoxious the odor of the skin, the flesh, the dung and the hair burning must have been? Imagine how obnoxious it was to those who traveled inside the camp as they looked out and saw those without the camp- the homosexual, the lesbian, prostitute, male prostitute, the whore, those with venereal disease, the eunuchs etc.

God is teaching us that when we come outside the camp of this world unto Jesus and are separated, we will be looked upon with the same disdain and disfavor with which the Jew looked upon those who were cast out of the camp and we will be just as much an odor to those in the camp of this world as were the skin, the flesh, the dung and the hair of the sacrifice burned outside the camp! This is the hardest thing about separation! When Jesus was put outside the camp, this old wicked world was saying to Him “You affect us like the outcasts and the odor of the burning flesh affected Israel.” When we go outside the camp to Him, then we become equally as obnoxious to the world that crucified Him.

A quarter of a century ago I became Pastor of the First Baptist Church of Hammond Indiana I had always pastored churches that were outside the camp- churches of good, dedicated Christian people, but churches with standards and convictions. We were looked upon by the apostates with disdain. They called us unloving, uncooperative, unscholarly and shallow Suddenly I was Pastor of the First Baptist Church in the downtown section of a large metropolis. The elite began to shower me with attention. I enjoyed it. It was a great temptation for me to come inside the camp There were many ways I sought to justify such a course of action-until one day one of the wealthiest of our members told me that he was tired of the little dirty bus kids! He told me that he had met with some of the affluent people and they had decided that I had to choose between them and the bus kids! If we kept the buses, they would leave with their money. If we stopped the bus ministry, they would stay. They threatened me by withholding their offerings, assured me that we could not make it financially without their wealth, and gave me a few days to make up my mind. God revealed to me that I should not forsake the poor and the needy, and on my face after a night of prayer, I chose the bus kids over the wealth of those who threatened me. Suddenly, I was outside the camp again, and to those who considered themselves to be the elite, affluent and scholarly, I was as obnoxious as the motley crowd that was expelled from the camp of Israel and as disdained as the burning flesh outside the camp.

Invitations to speak at civic clubs ceased. Dinner engagements with the elite were stopped, and suddenly I found myself outside the gate, rejected by the self-styled elite, affluent and scholarly of the area. There I was with the bus kids, the poor, the halt, the maimed and the blind. I was lonely I did not want to love and be considered unloving. I did not want to be considered unscholarly and uncouth. It was dark. It was lonely. Then suddenly I heard a Voice say, “Welcome.” I looked up to see Whose voice was speaking. I saw nail prints in His hands and feet. I heard Him say, “Welcome. I am glad you have come outside the camp to Me.” Suddenly I realized that Jesus was already outside the camp and that He was just as unpopular with that elite crowd as I was. Ah, how sweet the fellowship! How wonderful was His presence! I was outside the camp WITH HIM! What a bargain! What a deal! What a Saviour! 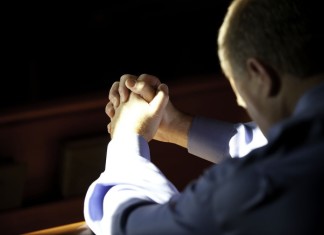 I am so glad David knew God as well as he did. I am also glad that David went through so many difficult life experiences...