Stop Trying To Scheme God Once And For All 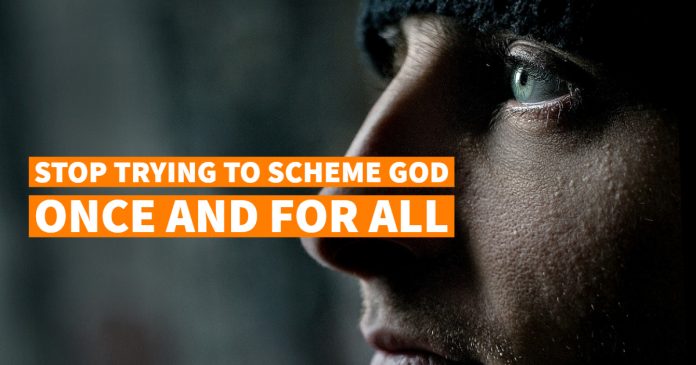 Proverbs 8:1-3  “Doth not wisdom cry? and understanding put forth her voice? She standeth in the top of high places, by the way in the places of the paths. She crieth at the gates, at the entry of the city, at the coming in at the doors.”

Years ago when my children were young, the boys shared a bedroom and the girls shared a bedroom. Most of the time, the girls would just go to sleep when you tucked them into bed. However, the boys were another story! I found out years later, they figured out that in our hallway was a sensor light which was connected to our security system. When that little red light blinked, it meant someone was coming down the hallway. When they saw it blink, they would jump into bed and pretend to be sleeping. As soon as they knew we were back out in the living room or wherever, one of them would be the lookout while the other would play Nintendo. Who knew we had 5 and 6-year-old, high-tech felon’s in the house! The little criminals! Well, check that! The little smart ingenious criminals!! Their only problem was that they could never keep it 100% quiet in there. They would make a great play in the game and let out a whispered “YES!!” or the guy who was supposed to be the lookout would start watching the game the other was playing and forget to watch the little red light. The next thing you knew, we would hear something and go catch them. Their mama and I didn’t know they were using that little red light as their compadre until they grew up and told us last week!  Ha! Ha! Well, it wasn’t last week but it was after they had left for college.

Though we didn’t figure out they were using that little red light sensor to help them commit their crimes against humanity, we did figure out that they were not going straight to bed like we had told them to. Some nights I would pray with them and then I would say, “Alright boys, it’s time for bed! Do you understand?” — Immediately I would hear them say — “Yeth Thur!” “Yeth Thur!” “OK! good! I’m glad you understand this! Now there will be no talking, we are going to go straight to bed boys, do you understand?”  — “Yeth Thur!” “Yeth Thur” — “If I hear you talking or giggling or playing around, you will be getting a spanking, is that understood?”  “Yeth Thur!”  Yeth Thur!” — So, the reality was that they clearly understood and had been given the wisdom in all of this. I had put forth my voice and cried out to them the importance of heeding this advice. It was right there for them to grab ahold of. It wasn’t hidden, it was right there nice and high up so they couldn’t miss it. It was as our verse says today, “in the top of high places, by the way in the places of the paths….at the gates, at the entry of the city, at the coming in at the doors.” Yet, in spite of all of the availability of this wisdom to help them make their decision, they would choose to giggle, whisper, play Nintendo, etc. Sometimes, I would say my speech to them, go out the door and hide just beyond their sight. It would usually take about 1 minute and I would hear one of them throw a dirty sock or something over at the other one and there was a smack followed by a giggle and just like that the wisdom of obeying dads orders went out the window. Suddenly, I would come around the corner and it was spanking time! Then I would talk to them in the fashion I learned from my dear ole dad. I would say, “Do you boys enjoy spankings?” Of course they would cry “NO!” Then I would say what my dad always said to me, “Well boys, you are in charge of whether we have spankings or not!” “If you do not want a spanking, then simply obey your father!”— Duh! Really! All we gotta do is obey! Who knew???

I remember thinking to myself as I would deal with those little lawbreakers,“What is so hard about obeying what I said?” I just 2 minutes ago stood right by their beds and told them exactly what was going to happen and they both said “Yeth Thur!” “What in the world is the deal?” You probably are thinking as you read this, “What a couple of goofballs, what were they thinking?” Well, that’s the simple truth of it. They weren’t thinking about the wisdom from dear ole dad, they were thinking of their own selfish desires. The sad truth is, I have this same experience continually with people I preach too. I stand up there in front of young people and I put the wisdom of God right up there in plain sight for them to see. I put it “in the top of high places, by the way in the places of the paths….at the gates, at the entry of the city, at the coming in at the doors.” Yet, I watch them in mere moments ignore the clear wisdom of God and make the most ridiculous, foolish decisions imaginable.

God does not hide his wisdom from us. He puts it right there in plain sight in the Bible! He puts it up high (top of high places) so all we have to do is look up and see it. He puts it right in the paths (places of the paths) of our lives, as we enter buildings and other places (at the gates) , in our daily activities where we live in our towns and cities (at the entry of the city), and right in the privacy of our lives (coming in at the doors). In other words, God is not hard for any man to find. He has written his law upon our hearts (Romans 2:15) and He has promised that if any man truly seeks Him, he will find Him. The Bible was given by God to the whole world. God has put it right up there for everyone to see and learn and make use of in their lives. It is sad that the average human is nothing more than a silly goofball child, more interested in themselves than in the wisdom of the God that made them. Sadder still  is to watch people who claim to be Christians, have God put his directives in His Word, have preachers preach them behind pulpits, have teachers teach them and authors write them and yet they are described in Mark 8:18  “Having eyes, see ye not? and having ears, hear ye not? and do ye not remember?” It is beyond sad to see them act like childish goofballs and forget all about the clear wisdom of God. I have watched so many Christians in my life do their own thing, have it all blow up in their faces and be under the chastising hand of God, and see them upset and bitter that it’s all happening to them.

Friend, don’t you think it’s time for you to grow up.

Don’t you think it’s time to stop all the foolishness that is going on in your life? Don’t you think it is time to stop trying to figure out how to get away with stuff and just obey the Lord. Instead of trying to figure out that if you watch that blinking red light you can jump back in bed and pretend to be asleep before you get caught, why don’t you just decide to look up and see God’s wisdom and apply it to your life. Some of you spend so much time trying to figure out how to get away with sin, that if you even put half of that effort toward doing right, you would be giants of the faith! Just remember as you live out the rest of your short vapor here on this earth, someday you will stand before God to give account of the works done in your body. There will be no excuse for any of us. God has covered all of His tracks so to speak. He sees everything, He hears everything, and He knows everything! Hebrews 4:13  “Neither is there any creature that is not manifest in his sight: but all things are naked and opened unto the eyes of him with whom we have to do.” Beyond that, He has gone to great lengths to show the whole world that He loves them and desires a relationship with them. He sent His son Jesus Christ to the cross to pay for their sins and provide a way to Heaven for them and then He has sent His Holy Spirit to indwell them and to guide them into all truth. He has made everything clear to all of mankind as to what is necessary for salvation and what He expects of His children, so that the whole world stands before him “Without Excuse”! Consequently, it’s time to stop being an excuse making Goofball Christian! God’s Wisdom is right up there for you to see and grasp. He puts it all around you in every corner of your life. It is of course in His Word for you to easily read! Choose today to become a wise, obedient Christian and “Stop Being A Goofball Christian!”

Have a Great Day Today, and Don’t Miss Any of Your Divine Appointments!

Strong Women In The Bible

The Simplicity of Salvation

How to Make Your Marriage a Team