Labels Are For Distinction 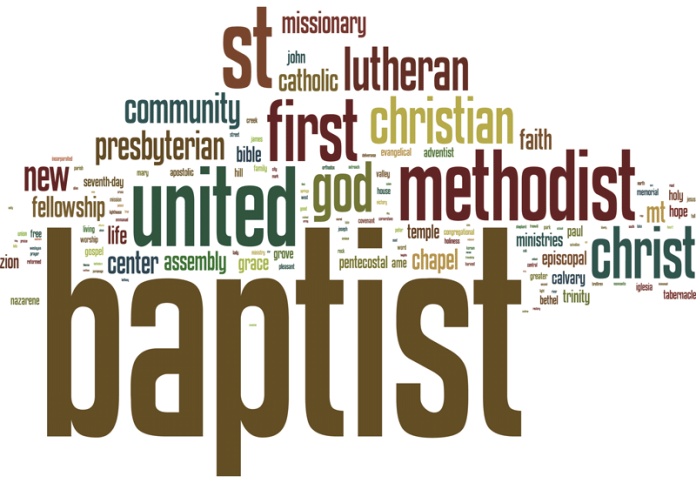 Several weeks ago we had a family visit the church and after the service the husband was telling me of his concern for the “compromise” of the modern church.

To some extent I agree with him, but really… what is the point of a denominational label? A denominational name identifies a church with what they believe doctrinally. This man’s argument was that “Aren’t we all Christians?”

The short answer to that is “No”… if you study the word Christian in the bible, it occurs three times, but always used to describe a group of people who believed a very specific body of doctrine.

Believe it or not… a Catholic a Methodist, a Jehovah’s Witness, a Mormon or a Baptist do not believe the same thing about Jesus Christ, or the Bible, how to get to heaven or even what the purpose of their church is.

Many of the words are the same, but the meaning of those words are very different… and while everyone today calls themselves “Christian” many denominational groups are far removed from what the bible tells us that the early church believed. So at that point, if people are believing different things, then you must establish where you get your authority from. I learned a saying from another pastor that I have found helpful and easy to remember.

“For something to be Spiritual… it must be Scriptural”.

This year we celebrated the 7th anniversary of the beginning of the Tri-State Baptist Church… when we came out here to start this work, it was because we believed that we were led of God to begin a bible preaching, bible believing church. I am proud to pastor and identify myself as an independent Baptist… because I believe that the name of our church identifies at least somewhat with what we believe.

I was not born into a Baptist family, I became a Christian when I was 31 years old and joined a Baptist church shortly after my conversion… but I am glad that I grew up spiritually in a Baptist church with a pastor who drew his authority to preach and teach from the scriptures.

In my mind, there are many distinctions that make us a Baptist… first and formost is that we believe that the BIBLE is God’s Word and our sole authority for faith and practice. In other words everything that we believe and practice must have its origin in the pages of scripture either through direct command, or in principle. Because everything outside of the Bible is man’s opinion.

Sometimes people ask me… “What do you think about _____”… If it is a bible question, I do my best to give a bible answer, because people are not interested in my opinion, they want to know what the Bible says. If the answer involves my personal opinion, I let them know that it is just my opinion…. the problem comes in when we start to place our opinions above what God has revealed as His position already.

In our area, we have had several churches take the denominational distinctions off their church name, in my opinion that is a reluctance to publicly declare what they believe. Churches today are trying to be “generic” so that they don’t offend people, and what has happened is that they are lost the reason for their distinction.

I challenge all who read this… Does the church you attend have a statement of faith and do you understand it and agree with it? Or are you following someone elses opinion?

Original article can be found at http://tristatebaptist.org/2012/09/labels-are-for-distinction/

How To Tell If You’re Putting God First In Your Home?

Making Positive Changes in Your Life