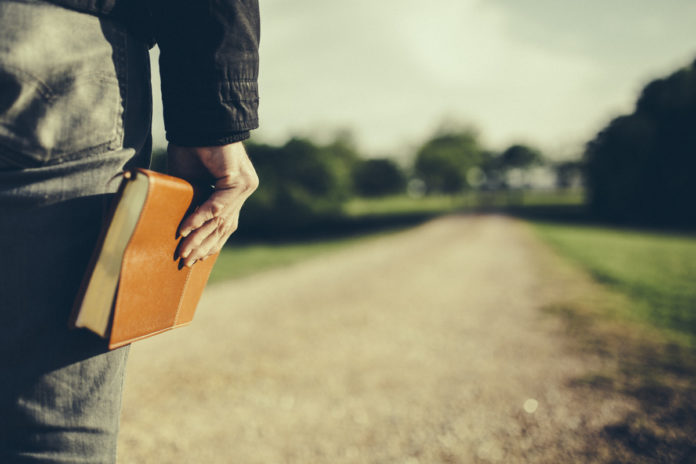 We hear people wishing others a “Happy New Year.” We might well question: What are the possibilities for a happy 1951? Surely there is nothing happy about the world situation. Sorrow and heartaches are the sure prospects for the year ahead.  Our national situation is far from peaceful. Uncertainty characterizes the whole world.  In the life of an individual, what is the prospect for a “Happy New Year”? We feel the increase of living costs; crime is on the rise, and we have a rebellion against law and order.  If we look at our circumstances and surroundings, there is no possibility for a “Happy New Year.”  But there is the possibility for a happy new year in our God and through faith in Him.  Let me give you a threefold foundation for faith for the new year.

If we are to advance this next year, it must be upon the promises of God. Elijah relied on His promises. After delivering his prophecy of “no rain” to Ahab, the Lord sent him out by the brook Cherith, telling him, “And it shall be, that thou shalt drink of the brook; and I have commanded the ravens to feed thee there.  “Elijah obeyed God and dwelt by the brook Cherith. Ravens brought him bread and flesh in the morning and bread and flesh in the evening, and he drank from the brook. Elijah stayed there until God told him to move.

When the brook dried up because of the long drought, God sent His prophet to the house of a widow in Zarephath. He found there a woman in great destitution. Certainly, she was in no condition to take care of another person. When Elijah asked for a morsel of bread, she said, “I have not a cake, but an handful of meal in a barrel, and a little oil in a cruse: and, behold, I am gathering two sticks, that I may go in and dress it for me and my son, that we may eat it, and die” (I Kings 17:12).

Elijah told her to go ahead and make the cakes, but to make him one first, then to make for herself and her son. Elijah said, “For thus saith the Lord God of Israel, The barrel of meal shall not waste, neither shall the cruse of oil fail, until the day that the Lord sendeth rain upon the earth” (vs. 14).

We have God’s promise to provide all we need.

1. Know the promises of God. The great and mighty promises of’ our Father mean nothing to most people because they do not know what they are.

Of the 32,000 promises in the Bible, how many do you know? How can we have faith in His promise of peace, power, provisions, and all needful things unless we know His promises?

2. Use the promises. Too many people live poorly while wealth and abundance are stored nearby.

Mr. Spurgeon used to tell of the poor woman who framed a check for $12,000.00 which had been given to her by a dying friend. She had no idea of its worth and so retained it as a keep sake. Mr. Spurgeon turned it into cash for her so she could have a comfortable living.

We need to turn the promises of God into present possessions.

3. Rely on His promises. Some people know the promises, even try to use them; but they still are fearful and afraid. Why? Because they are not sure God is faithful to perform what He has promised. In childlike faith believe what God has said and rest your soul on His Word.

Come with me to Mount Carmel. The stage is set for a tremendous event. Elijah has called the children of Israel, along with the prophets of Baal, to the mount. See him as he stands before the crowd and says, “How long halt ye between two opinions? If the Lord be God, follow him: but if Baal, then follow him.”

He instructs that two altars be built, one by the prophets of Baal and one by himself. Sacrifices will be placed on the altars, but no wood put under them. “. . .the God that answereth by fire, let him be God.”

Anyone can see that Elijah is in a tight place, but he is not afraid. He is depending on God’s promises and remembering God’s past performance.

The prophets of Baal pray and call upon their god, but nothing happens. Elijah mocks them until they cut their bodies with knives and lancets. This bloody and vain scene goes on until evening time.

Finally Elijah calls the people to him. He repairs the altar of the Lord that is broken down. He places a bullock upon the wood. He commands that barrels of water be poured upon the sacrifice and the wood and in the trench about it.

Can you not see Elijah standing nearby? The prophets of Baal have failed. Their god did not answer by fire. It is about time for Elijah to pray. Will his God answer his prayer?

Now it is time for Elijah to pray. It is the time of the offering of the evening sacrifice. The prophet comes near and prays:

“Lord God of Abraham, Isaac, and of Israel, let it be known this day that thou art God in Israel, and that I am thy servant, and that I have done all these things at thy word.”

“Hear me, 0 Lord, hear me, that this people may know that thou art the Lord God, and that thou hast turned their heart back again.”

As soon as the prayer is uttered, the fire of the Lord falls and consumes the sacrifice-the wood, the stones, the dust, even the water that is in the trench. God was faithful to answer prayer.

What has God done for you in the past? Has He failed you at any time? You are forced to say that God has never failed in your hour of need.

First, prayer has been answered again and again. This is the testimony of people everywhere. Second, your needs have been abundantly supplied. Sometimes you could not see how or see your way out, but God sent His ravens (birds) to supply your needs morning and evening. Third, God sustained you in your hour of trial. When burdens came which you thought you could not bear, God was faithful. He brought you through deep waters; He gave you strength for the day. Fourth, comfort has been yours in your hour of need. Has He ever failed? No, a thousand times, no! We have failed, but God-never.

If God has been faithful in past days, then remember this: Our God changes not. Hear His word in Malachi 3:6, “For I am the Lord, I change not. . . .” Let us remember that “Every good gift and every perfect gift is from above, and cometh down from the Father of lights, with whom is no variableness, neither shadow of; turning.” As God has graciously worked in your behalf in days gone by, so will He do for you in the years ahead.

Have faith in God’s power and willingness to help us in any hour of need. Look not to yourself; depend not upon the flesh; rest not on the frail promises of men-but depend on God. My failures have been my failures, not God’s. Then let us rely upon our supernatural and all-powerful God.

Someone has said: “Faith works better when there is no natural hope. If there be even a straw for sight to cling to, then faith finds difficulty.”

George Mueller said, “Remember, it is the very time for faith to work when sight ceases; the greater the difficulty, the easier for faith. As long as there remain certain natural prospects, faith does not get on as easily as where natural prospects fail.”

The greatest faith is born in the hour of despair. When we can see no hope and no way out, then faith rises and brings the victory.

J. Hudson Taylor’s favorite verse was, “Have faith in God.” As a man who lived by faith, he often said, “I have trembled and failed again and again, but God has never failed.”

The barrel of meal and the cruse of oil will not fail if we step out upon the promises of God. Know that God is interested in you and desires to be your Helper. Remember that God is insulted and grieved when we look to ourselves, when we should be looking to Him.

Here is the basis of faith for the New Year: first, God’s promises; second, God’s past performance; third, God’s present power and willingness.

Declare now that the coming year will be one of faith in God. When worries and cares beset you, turn at once to His promises; meet His conditions for their fulfillment, then leave it with Him.

Do not dare enter the portals of a new year without settling this matter of your salvation. Right now, before this year dies and a new one begins, take Christ as your personal Saviour.

Don’t Be Ashamed Of Jesus; Be Soul Conscious

The Subjective Ministry of the Holy Spirit

We Can Have Complete Victory, So Why Settle For Compromise?