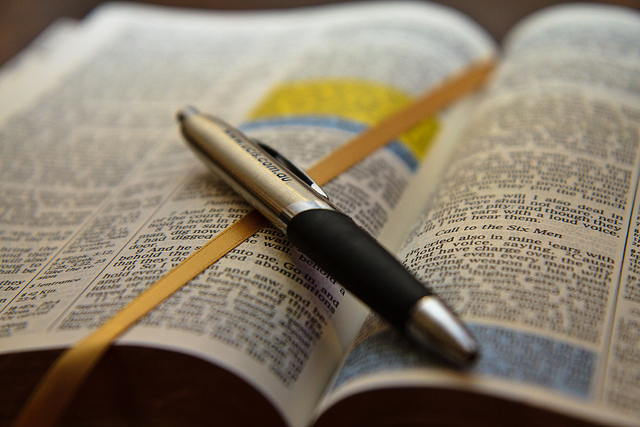 One day the load was especially heavy and the burdens were many. I had so many appointments that night and to be quite frank, I rebelled a little bit at having to solve the problems of others when I had so many myself. After counseling with many people, it was about midnight. As I started to go home, I had the following thoughts. Please read this poem very carefully.

“I have a burden, Pastor, that
I’d like to lay on you.”
I listened, tho he never knew
I had a burden too.

I took a tearful look toward mine;
Then his came into view.
‘Twas plain to see my burden was
The larger of the two.

I saw his load alongside mine,
And, tho they both were real,
The yoke he bore was made of wood,
And mine was made of steel.

To him I said, “Come unto me;
I’ll gladly carry thine”;
Then whispered unto selfishness,
“But who will carry mine?”

I softly laid my burden down
To help him his to bear,
While knowing that my heavy load
I’m not allowed to share.

I’ll help him with his burden, then
Regain mine after while,
When I will sigh and weep once more,
While now I force a smile.

I felt the CHAINS OF BONDAGE till
A CAPTIVE came to me.
He bade me help him break the bands,
And aid him to be free.

I saw the fetters binding him,
And felt a pity pain.
For his were made of little rope,
And mine of heavy chain.

I laid aside my heavy chains,
So he, my help, could borrow.
I’ll help free him of bondage now,
And think of mine tomorrow.

A DOUBTER knocked at study door;
I had an urge to groan,
“Why bring your pebble doubt to me,
When mine is made of stone?”

I smiled at him and listened, while
Believing in my doubt.
I laid it down reluctantly,
And feigned about a happy shout.

I sat ALONE in darkened room,
And felt a shadow’s knife.
Another came to share with me
Some darkness in his life.

As I compared my night with his,
His dark possessed a lack.
For his was just an evening shade,
While mine was midnight black.

I slowly laid my nighttime down,
To help him seek for light.
I’ll tread my dimming path again,
When I have made his bright.

A TROUBLED SOUL came to my door,
A problem to confide.
I had a problem, too, that day;
‘Twas hard for me to hide.

Yet, ’tis my lot to fill his need,
And put mine on the shelf.
For I must lay my heartache down,
And hide it from myself.

He told me of a broken heart,
While mine was breaking too.
I told him of a mending God
Who maketh all things new.

He told me of his thirsty soul;
I gave him living water.
He said he was a broken vase;
I told him of the Potter.

Another came when I was SICK
To say he had the flu.
His fever was a hundred-one,
And mine a hundred-two.

Another WEEPING SEEKER came,
For me, his tears to dry.
I went alone and wiped my eyes,
Then told him not to cry.

Another came when I was TIRED,
To say he needed rest.
I lifted him with weary arms,
And tried to give him zest.

AND NOW, IT’S LATE, and all have gone,
Each one to his abode.
So I must find my problems, and
Regain my heavy load.

Where is the burden I had borne?
I had it while ago!
Where is the problem I must solve?
I left it here, I know!

Where is the darkness I once knew?
I now see only light.
The chains, the tears, the pains, the fears,
Are nowhere now in sight!

I cannot find my broken heart!
Where is my fevered brow?
I have a song! the tears are gone!
I cannot find them now!

My sickness, now, bath turned to health!
And trust replaceth fright!
Assurance covers all my doubts;
My darkness now is light!

I heard a voice from Heaven say
“My child, ’tis always true:
When you take care of others’ needs,
I will take care of you.”

STAYING FUNDAMENTAL IN A LIBERAL WORLD

A Time For Parenting

A Call To Biblical Manhood