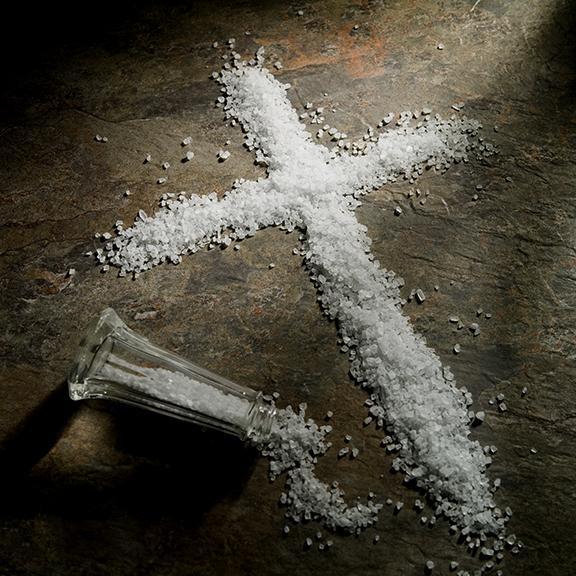 Although I’m not a fan of the snow now that I’m 44, when I was very young I loved being outside playing in it until I was nearly frozen. For whatever reason, I always thought it was great when I’d see large crystals of rock salt that had been dumped atop of the ice. Much to my dad’s horror, he once discovered me nonchalantly picking up a huge chunk of it and plopping it into my mouth like I had done countless times before, unbeknownst to him. Being so young, I was unaware of the chemicals it contained; I simply wanted the salty taste. I still prefer salty to sweet.

With the recent activity in our country that is so astounding to me, I can’t help asking for someone to please pass the salt. Salt is a preservative. Salt adds flavor. Salt makes things taste less “blah” or dull; it makes it more palatable. And salt, whenever it comes into contact with an open wound, oftentimes stings.

Salt – used for seasoning, as a preservative, etc.; used as purgatives; to cure, preserve; to keep in reserve; store away; to save

I know most people are on Facebook so they can keep in touch with friends and family members, particularly those that are out of state. I know I’m on there for that very same reason. But I have to wonder why people post the things they do. I’ve seen things lately that leave me awestruck, but not in a good way.

There seems to be a rising trend of believers willing to share and promote things that are laced with profanity. I’ve watched with complete dismay as believers not only post pictures of tattoos, they “ooh” and “ahh” about wanting to get one! I’m saddened and stunned as I see the posts that many Bible college graduates are now sharing, especially the ones of them cuddling up next to their boyfriends, or the ones of them posing for the camera in their bikinis for the world to see. It’s astounding how many “Christians” are supportive of our land’s new law regarding “equality” in marriage, simply because they love someone who happens to be gay. Despite love, God’s law should trump man’s law. I, too, am the relative of someone that lives a homosexual lifestyle, and I love him, but that doesn’t mean I will adopt his philosophy (and it also doesn’t mean that I’ll be unkind toward him as a person). “And be ye kind one to another, tenderhearted, forgiving one another, even as God for Christ’s sake hath forgiven you.” – Ephesians 4:32

What this should mean is that we should refrain from being ugly or unkind to others who differ in their values than us, but we should stand firm in that God’s ways are higher than our ways; His thoughts are higher than our thoughts, and His Word stands, regardless if it stings. I will support people, but not their philosophies if they’re contradictory with God’s Word. “God forbid: yea, let God be true, but every man a liar;” – Romans 3:4(a)

Bible College Student, where are your convictions? Do you have your own, or are you still riding on your parents’ coattail? Is your Christianity real or a façade? Who are you influencing for Christ? Were you just borrowing your pastor’s or your youth pastor’s convictions? Did you lose your “amen,” or were you only going through the motions to impress those who seemed less spiritual than you at Bible college? Were you just spouse shopping, or did you go there so you could better equip yourself to serve the Lord?  Are you proud to seemingly have wasted thousands upon thousands of dollars’ worth of tuition that your parents or grandparents likely saved for years to provide? Where’s your biblical grit? “But sanctify the Lord God in your hearts: and be ready always to give an answer to every man that asketh you a reason of the hope that is in you with meekness and fear:” -1 Peter 3:15; “In like manner also, that women adorn themselves in modest apparel, with shamefacedness and sobriety; not with broided hair, or gold, or pearls, or costly array;” – 1 Timothy 2:9

Sir or Ma’am, how are you as a believer coveting getting that tattoo? Have you not read in Leviticus about not printing marks upon your body? Have you forgotten that we’ve been bought with a price? How can you entertain yourself with the things that landed Jesus on the cross? How are you supposed to influence others — your children? your grandchildren?  Those following your influence will always go further than you go. “Ye shall not make any cuttings in your flesh for the dead, nor print any marks upon you: I am the LORD.” – Leviticus 19:28

The only prints you should be seeing on a body are those that Thomas referenced in John 20:25: “…Except I shall see in his hands the print of the nails…” – John 20:25; “For ye are bought with a price: therefore glorify God in your body, and in your spirit, which are God’s.” – 1 Corinthians 6:20

To our friends on Facebook, how can you profess Jesus one minute and then openly cuss the next? Have you not read in James 3 verse 10 where it says “Out of the same mouth proceedeth blessing and cursing. My brethren, these things ought not so to be.” How can you expect others to take your profession seriously? With each curse word, you diminish your influence for the cause of Christ.

We only have one life to live and if you’re like me, the days are feeling shorter and shorter. We’ve got a very limited space of time to make a difference. We’ve got one (short) lifetime to try to be the preservative of this world – the SALT. Those who oppose us will feel a slight sting if we’re salty enough. We’re not supposed to be bland Christians. We’re supposed to be different. If we’re blending in with the rest of the world, we’re not doing it right. We like to quote the verse that says, “If my people which are called by my name…” yet we seem to think the portion that goes on to say “…turn from their wicked way…” must be meant for the unsaved. This verse is for us! What exactly is “our wicked way,” anyway? Could it be these things?

My plea is for us to each inventory the things we’ve shared with our friends on social media and ask ourselves if it aligns with the Word of God. It doesn’t matter in the end if it’s something we’re pleased with; we need to ask ourselves if God is well pleased. There’s also a difference between being a believer and being a Christian. A Christian follows Christ. A believer has simply put their trust in Him for their salvation; that doesn’t necessarily mean that they are following Him or striving to be more and more like Him and, in turn, less and less like the world.

“Ye are the salt of the earth: but if the salt have lost his savour, wherewith shall it be salted? it is thenceforth good for nothing, but to be cast out, and to be trodden under foot of men.” – Matthew 5:13

How To Handle Life When You’re Depressed

Three Things To Help You Keep Running The Race