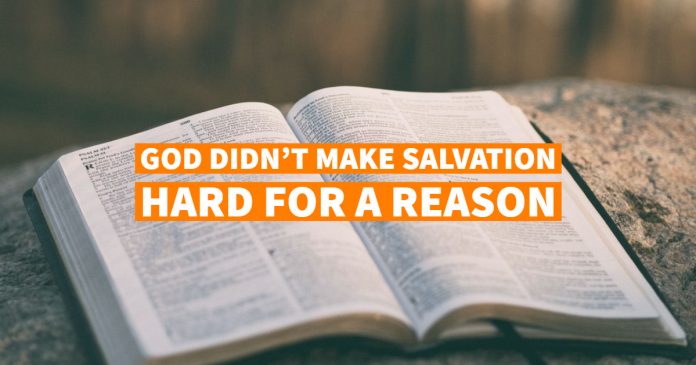 “For whosoever shall call upon the name of the Lord shall be saved.” Romans 10:13.

While a student In Bible College, I remember a story that I will never forget. Dr. Malone was preaching, and he told a story about a student who brought a lost man to the “altar.” Dr. Malone said he overheard the sinner say, “I don’t feel like getting saved today.” The student said, “You don’t have to feel like it, you just need to believe what Jesus did for you on the cross.” The sinner responded, “But I want to feel something.” Again the student assured him it was not a feeling he needed. He only needed faith. Finally, the sinner knelt and prayed, asking the Lord to save him. Dr. Malone said, “As soon as the two of them stood, the student asks, how do you feel?”

One of the issues confusing pastors and sinners, is the concept that one must “feel” a certain way or his salvation is not real. The problem is we have made feeling a synonym for conviction. Now, feeling may follow conviction. However, feeling need not, and many times does not. Feeling is not conviction, nor is conviction a feeling.  Conviction is a conclusion that one comes to about an issue. Some who get saved may weep and tremble, while another may laugh and shout. Then, there are those who show little or no emotion. Now, who of us can say for sure which person REALLY got saved? The answer is, none of us.

Getting saved is the easiest thing in the world. For the life of me, I can’t figure why pastors and evangelist want to put razor wire between the sinner and the Savior. “But what saith it? The word is nigh thee, even in thy mouth, and in thy heart: that is, the word of faith, which we preach; 9  That if thou shalt confess with thy mouth the Lord Jesus, and shalt believe in thine heart that God hath raised him from the dead, thou shalt be saved. 10  For with the heart man believeth unto righteousness; and with the mouth confession is made unto salvation. 11  For the scripture saith, Whosoever believeth on him shall not be ashamed. 12  For there is no difference between the Jew and the Greek: for the same Lord over all is rich unto all that call upon him. 13  For whosoever shall call upon the name of the Lord shall be saved.”Romans 10:8-13. Now, what could be easier? The text says the word is in the heart and mouth.

Then we hear the criticism about “the sinners’ prayer.” I am not sure how a sinner gets saved without a prayer. I guess there is some kind of sinners’ prayer that doesn’t work. If anyone knows what it is, they should enlighten us. We hear that one, two, three, repeat after me, won’t save the sinner. I would be curious how anyone knows that the sinner led in a prayer isn’t saved. The fact, my dear brother is, you don’t know if anyone gets saved or not. If they bawl and crawl their way to the “altar” on their knees, you and I have no assurance they really got saved. Personally, I would no longer announce if people get saved or not. I think the safe thing to say is we had a certain number of professions.

The Scriptures tell us how to believe, and what to believe. But, we are never told what emotional response or feeling one must demonstrate. Let me conclude with one example, and I have many.

About fifty-five years ago, my wife and I went to her brother’s house for the sole purpose of leading him to the Lord. Vernon worked on the rail road, and the heat in his boots had caused a rash. He was setting at the table applying alcohol. I presented the gospel to him, and ask if he understood. He said he did. I ask him if he would be willing to accept Christ, if I prayed with him. He responded with a “yes.” We prayed, afterward he continued to rub the alcohol on his leg. There was no weeping, shouting, or visible emotion. Vernon is still living for the Lord, and I am as sure of his salvation as I am that of any person reading this.

I believe in easy believeism. I think there is a mindset that we are in some kind of “Laodicean period,” where people have no interest in salvation. That mindset conditions our attitude toward the lost. So, we put every obstacle before them, and if they aren’t willing to jump them, we beat them up to confirm what we believed. I think we should remove every obstacle between the sinner and the cross, and do everything in our power to get people to accept Christ; so did Jesus, and Paul. Believing is easy for those who believe.

Original article can be found at http://www.kenblueministries.com/2013/10/06/easy-believeism-2/

Understanding Your Spouse: 4 Main Issues That Cause Problems

3 Ways Jesus Was A Man Of Authority

Why Have Preaching When You Can Have Great Singing!